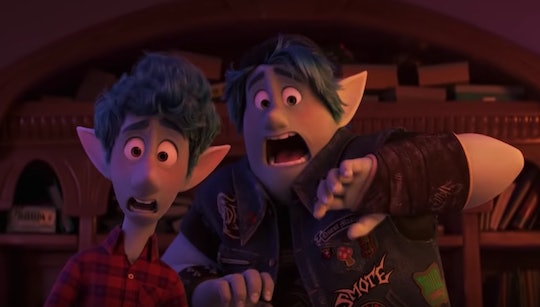 You Can Watch Pixar's New Flick 'Onward' On Disney+ TOMORROW

Pixar's new animated flick first made its debut in theaters on March 6, but Onward will be available to stream on Disney+ before you know it. Onward, rated PG, follows two teenage elf brothers' "extraordinary quest" to discover some magic in their world after losing their father when they were young and you'll soon be able to watch it all unfold from the comfort of your sofa, starting next week.

While Disney movies that come out in theaters typically have "around a seven-month wait" period before they make their way to streaming services, Onward's Disney+ premiere date has been pushed up. On March 20, Disney announced that Onward will be available to stream on Disney+ starting on Friday, April 3 in response to the current social distancing efforts due to the COVID-19 outbreak. Disney also opted to release Frozen 2 to Disney+ three months early.

"While we're looking forward to audiences enjoying our films on the big screen again soon, given certain circumstances, we are pleased to release this fun, adventurous film to digital platforms early for audiences to enjoy from the comfort of their homes," the film's director Dan Scanlon and producer Kori Rae told People in a statement.

Without such circumstances, it would have been several months before Onward was made available to stream digitally. For reference, it took roughly eight months until Toy Story 4 appeared on Disney+ after its release in movie theaters in June 2019.

If you haven't seen Onward yet, reviews suggest it's worth adding to your watch list. Variety called the movie "sweet-spirited and pristine" with moments of breathtaking animation. In Onward, the brothers receive a magical staff that can bring their dad back to life for one day. But when something goes wrong, it only causes the lower-half of their dad to appear, according to Entertainment Weekly. This sets them out on an epic road trip in a mythical land to bring the rest of their dad back, and is filled with emotional moments, in typical Pixar fashion.

In fact, Scanlon based the film on how he felt when he and his brother lost their own dad at a young age, according to Rolling Stone. But there are also some very funny moments and characters, too, that are an "endearing delight", as The Film Stage put it. Everyone will find some humor in the roving pack of fairies on motorcycles, and the neighing horse cop, as Entertainment Weekly reported.

So as you continue to stay home and practice social distancing, you can look forward to Onward's Disney+ release date next month. Until then, you can keep yourself and your family entertained by watching the endless amount of Disney movies and Pixar shorts are already on the streaming service.

This article was originally published on March 7, 2020