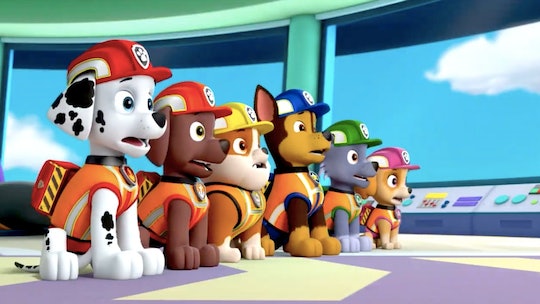 ATTN Parents: 'PAW Patrol' Has Not Been Cancelled

Paramount Network's long-running reality TV show Cops has been pulled off the air and so has Live P.D. on A&E, and apparently some people were worried that PAW Patrol was perhaps cancelled as well (don't panic, it's not). Networks have been making moves over the past few weeks to be more inclusive and take a stand against racial injustices, but reactions to a statement from PAW Patrol have gone a little off the rails.

So, why would anyone try to get a children's show about eager pups who want to protect and serve Adventure Bay cancelled, you ask? Well it's the "protect and serve" element that had people talking. After the death of George Floyd in police custody in Minneapolis and the fatal police shooting of Breonna Taylor in Louisville, there have been protests across the country demanding an end to systemic racism and police brutality. Frustrations and outrage have only been exacerbated in recent weeks as the police have clashed with protesters and activists are working hard to draw attention to a movement to "defund the police."

Chase the pup on PAW Patrol, however, is an officer of the law. Even so, jokes about canceling PAW Patrol first started after the children's show chose to mute its social media content to stand in solidarity with the Black Lives Matter movement. "In solidarity of #amplifymelanatedvoices we will be muting our content until June 7th to give access for Black voices to be heard so we can continue to listen and further our learning," PAW Patrol tweeted on June 2.

A few people made some wisecracks about Chase, the pup police officer and arguably second in command to Ryder, their young child boss. One person tweeted "Defund Chase" while another said "Abolish Chase."

Some comments appeared to be more seriously critical of the show, though it's hard to say for sure. "Perhaps naming your main character police dog 'chase' is a bit tone deaf to the suffering of people who have actually been on the receiving end of dogs used as weapons by the police. My 3 year old calls his stuffed Chase 'Jace,'" one parent commented on PAW Patrol's tweet. Another commented, "You’ve already brainwashed a bunch of kids into thinking law enforcement is a noble and just profession. better to scrap production forever if you want to make lasting change."

"The effort to publicize police brutality also means banishing the good-cop archetype, which reigns on both television and in viral videos of the protests themselves," New York Times critic Amanda Hess wrote "... Paw Patrol seems harmless enough, and that’s the point: The movement rests on understanding that cops do plenty of harm."

After that, some people decided to roll with the joke that PAW Patrol could be cancelled. "You know what must be done," one person tweeted with a photo of the PAW Patrol crew and an X over Chase's face.

Another noted that if, indeed, PAW Patrol was cancelled, toddlers could come together and form a different protest of their own. "All the three year olds coming together when y’all get Paw Patrol cancelled."

Fortunately for Chase, it seems Twitter was mostly just having a laugh and perhaps letting off a little steam. Although some people didn't appear to be in on it. Eric Trump managed to find the time to tweet about PAW Patrol in his busy schedule, writing: "Now the left wants to cancel 'Paw Patrol.' These people are truly insane..."

Sen. Tom Cotton also chimed in and said that "PAW Patrol was on the cutting board, too" following the news of Cops and Live P.D. getting pulled off the air. "You may know that Chase is the police cop in PAW Patrol, there's calls to euthanize the police dog on social media. I wish I could say I'm joking, but I'm not," he said.

The good news is that Chase and the rest of the pups are safe. Nickelodeon has renewed the show for Season 8, according to Decider, and there is a feature-length movie, PAW Patrol: The Movie, set to hit theaters in August 2021. Someone should really tell Eric Trump that PAW Patrol wasn't cancelled, he seemed pretty upset...