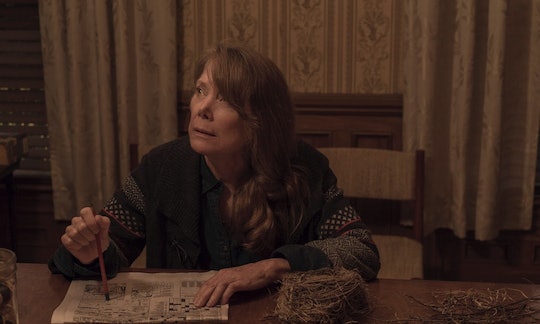 Ruth Deaver Could Be In Serious Danger On 'Castle Rock'

The suspense on Castle Rock is ramping up, and with the release of The Kid and his mysterious supernatural (and possibly evil) abilities, the mystery continues to grow. In Episode 6, he is last seen entering the Deaver house and then seen sitting outside with blood dripping from his hand. Because death follows The Kid wherever he goes, and Ruth was last seen in the house with him, fans are wondering, is Ruth Deaver dead on Castle Rock? Unfortunately, viewers will have to wait for the next episode to find out.

In the beginning of the sixth episode, Alan Pangborn has gone out on an errand for The Kid in hopes of curing Ruth’s dementia. “Time is her enemy,” he tells Pangborn, sending him out on a hunt to find Warden Dale Lacy’s totaled car. Why he did this is a mystery, but it is possible that he wanted to get Ruth alone to do whatever he needed to help or hurt her.

Henry Deaver has allowed The Kid to temporarily stay at his home as he waits to find a spot for him at Juniper Hill Psychiatric Hospital. After finding a box of old clothes and videos in Henry’s outhouse, The Kid puts on Reverend Deaver’s clothes while watching a video from Henry’s childhood (in which Henry and his father are seen hunting for a sound in the woods). Eventually The Kid shows up outside Ruth Deaver’s window, giving her one of his signature sinister stares, prompting Henry to take him to Juniper Hill immediately.

After dropping The Kid off, Henry gets preoccupied with his forgotten past, and uses the video discovered by The Kid to retrace his path into the woods. Meanwhile, with Ruth is left alone with Henry’s son Wendall who is visiting from Boston.

Henry winds up leaving Ruth and his son Wendell, who is visiting from Boston, as he heads out to investigate his own forgotten past. Meanwhile, a news broadcast reveals to the audience that a fire broke out at Juniper Hill, and many patients escaped. This includes, you guessed it, The Kid.

Later in the evening, as Ruth struggles to pick up the pills from a fallen medicine bottle, The Kid casually walks in through her front door, hangs up his jacket, and takes off his shoes. What happens after that is unclear, but the next time you see The Kid, he is sitting outside of the Deaver house, bloody, and head hanging.

Pangborn finds The Kid sitting outside, and before he notices the blood, he tells him that he found the car and it would be delivered the next day. But cryptically, The Kid tells Pangborn that there will be a monument for Warden Lacy and for everyone that helped put him away. When Pangborn finally sees the blood, in a panic he asks The Kid what happened to Ruth. “Why would you leave me in that trunk, Sheriff?” asks The Kid, prompting Pangborn to run towards the house to find Ruth.

When The Kid tells Pangborn about the monument for the people that kept him locked up, he almost seems remorseful. But when he asks him about why he allowed him to be locked in the trunk, his words sound vengeful. Initially he offered to help Ruth, but now that he’s left the house literally with blood on his hands, it makes you wonder if he’s just playing games with Pangborn. As a fan of Sissy Spacek, I really hope her character isn’t dead. Hopefully, the next episode provides a little more clarity as to what The Kid’s motives are, and exactly what he did to Ruth.