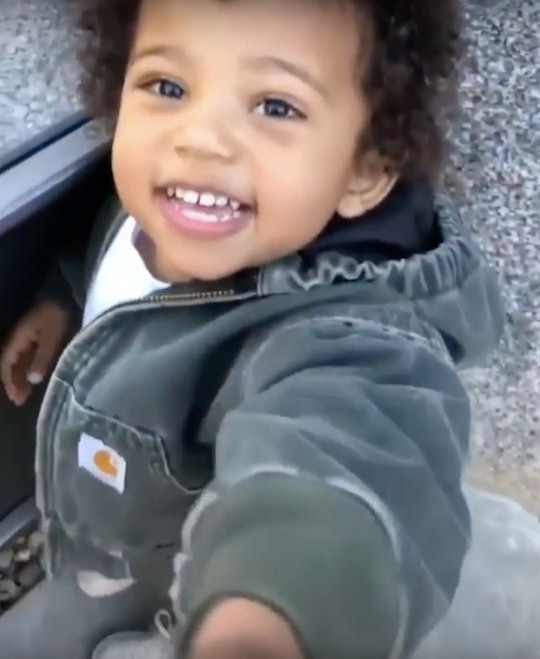 Kim Kardashian Says Her 2-Year-Old Son Saint Is A "Genius" — But Has He Started School Yet?

With a new school year now in full swing, fans are excited to watch as their favorite celebrities' children grow up. Starting school is a big deal and people want to share in the moment. Watching as all the new kids head off to school for the first time, many have turned their eyes on the Kardashian-West clan, and some may be wondering: Is Kim Kardashian's adorable son, Saint West, in school yet?

Saint West was pretty much born into the spotlight. Born in December 2015, he is the second child, and only son, of Kanye West and Kim Kardashian. As the middle child, Saint is bracketed by older sister, North West, born June 2013 and younger sister, Chicago West, born January 2018.

Considering Saint is only about to turn 3 this upcoming winter, he's a bit too young still to be in regular elementary school, although big sister North West is rumored to have started kindergarten this year. But, North did attend preschool before heading into kindergarten. In 2017, it was reported that Kardashian and West were paying almost $30,000 in tuition for their daughter's preschool. According to the Inquisitr, North, then 4 years old, reportedly went to a luxurious private school near the family’s Bel-Air home.

Knowing this, is it possible that Saint has started preschool himself?

On Jan. 18, Kardashian tweeted a quick brag about her 2-year-old son, writing, "Guys I have to say my son is a genius! He’s two years old and knows how to spell gargantuan. Had to brag for a sec!"

That is really impressive for a toddler! And maybe hints at some private tutoring or even North sharing what she knows with her baby brother? However, neither Saint's mom nor dad have mentioned or hinted at their son being in school yet, so it's unlikely that he is.

It makes sense that he wouldn't be in school quite yet, though. Two-years-old would still be early for any child to start preschool, even if they are as smart as Saint. Kids typically start kindergarten at 5 and preschool anywhere between 3 and 4, according to The Bump, so Saint is almost there.

Saint has also had a taxing enough year without having to worry about school. Earlier in 2018, People noted that Saint had recently come down with pneumonia. The report was backed by a Jan. 2 Instagram post from Kim Kardashian herself, thanking the doctors for helping her son.

The photo is a black-and-white image that shows Kim Kardashian carrying Saint on her hip. She captioned it with:

My precious baby boy is so strong! After spending three nights in the hospital & seeing my baby get multiple IV’s and hooked up to oxygen machines, our end of year was challenging. Pneumonia is so scary. I just want to thank every nurse & doctor out there who works so hard around the clock. We are so grateful for you all! He’s home and all better. He’s so resilient I’m sure he will still say the ambulance ride was cool! My strong Saint.

Don't worry too much, though! It seems that Saint has made a full recovery. Less than a week ago, Kardashian shared a photo of her son the beach, captioned, "O 💙M 💙 G 💙".

Fans were quick to comment underneath the adorable picture of Saint on the beach. One user noted his similarity to dad, Kanye West, commenting, "Mini Kanye."

"Literally a perfect child 😍 from birth I see both of y’all he is a doll omg 😮," one fan wrote.

Another user commented, "her son is so cute mashallah."

Although Saint West isn't quite school-aged yet, it seems that this little toddler is really living his best life. And although fans are eager to watch him grow up, they'll just have to take it all one day and one IG post at a time.