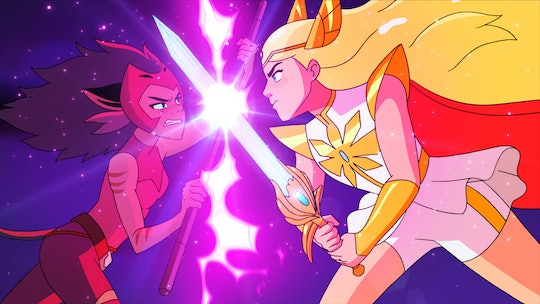 *Big* Kids Will Love The New 'She-Ra' On Netflix

If you ever watched Saturday morning cartoons as a kid, then you’ve probably heard of He-Man and the Masters of the Universe, as well as his sister, Adora (also known as She-Ra). Now, She-Ra has her own show on Netflix. But since times have changed, is She-Ra and The Princesses of Power appropriate for kids under 10?

Back in the day (that is, the late '80s and early '90s), it could be argued that kids were supervised less than maybe we should have been. Speaking for myself, it's hard to say of the He-Man cartoons were too violent at the time, but She-Ra and The Princess of Power is targeted toward kids ages seven and over. So if your kid is just a few years shy of 10, they should be able to handle it.

The official rating on Netflix is TV-Y7-FV, which means that it does contain some fantasy violence but that children ages seven and up should, in most cases, be OK watching it. It’s not unlike other fantasy animated series that have been on TV in recent years, like Avatar: The Last Airbender, which was also targeted toward kids ages seven and up, but contained some cartoon violence. If your child can distinguish between fantasy and reality and they’re over the age of seven, then they’ll likely be able to handle She-Ra too. But as with any TV programs or movies, it’s also going to depend on your own child’s level of development and maturity.

According to Common Sense Media, She-Ra and The Princesses of Power focuses on different important lessons each episode, like generosity or honor, and the violence and general fighting is toned down compared to the He-Man cartoons. Common Sense Media describes She-Ra as "a women-are-powerful message wrapped in classic fantasy elements" and you can't be mad at that. If there are elements of fighting among the characters, chances are, it’s for the benefit of the story rather than gratuitous violence.

This isn't the first time He-Man’s sister got her own show. In 1985, She-Ra: Princess of Power was the first official spin-off and shared a lot of the same aspects of the original series. But this time around, things are a little different. This includes everything from the title, which insinuates that there’s more than one princess working with She-Ra, to the lesson of female empowerment that any kid can learn a thing or two from.

Luckily kids don't need to know anything about the original shows to appreciate this version of She-Ra and it starts off right from the beginning for She-Ra, or Adora, herself. "We’ve really started from the same starting point where the original show started from because Adora has such a great backstory," Showrunner Noelle Stevenson told Entertainment Weekly. "She’s separated from her family as a baby, she’s sent to another planet, she’s adopted by the villain overlord and raised by him in this evil army. She’s been raised to believe that the villains are doing the right thing and that the Princesses are the evil ones. And so we follow her as she has this crisis of faith."

As a parent, you probably don't need to know anything before watching it either. Other than it’s bound to set a good example for kids and that the violence is minor enough to make you the best judge of whether or not your kid can actually handle it.