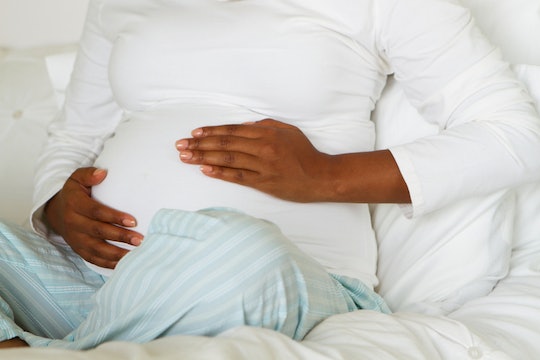 Once the first trimester of pregnancy has passed, moms-to-be start breathing a little easier and feeling more ready to choose names and share their news on Facebook. Still, there's a lot that can happen between the third month and the ninth, and when a symptom such as spotting in the second trimester occurs, it's natural to worry that something might be wrong with the baby. Before you jump to worst-case conclusions, know that light bleeding during pregnancy isn't all that uncommon. Although any bleeding should always be brought to your doctor's attention, the chances of its being serious aren't as great as you might think.

"We are concerned about any and all bleeding, but sometimes bleeding can be benign," Monica McHenry Svets, M.D., an OB/GYN at the Cleveland Clinic, in Ohio, tells Romper. "If there is a clear preceding event, like intercourse, we will evaluate patients, but reassure them that their pregnancy is not at risk."

Other common causes of light bleeding at this stage include having a pelvic exam, or engaging in rigorous activity such as running or jumping. Infections such as bacterial vaginosis, yeast infections, or STDs during pregnancy can result in bleeding, along with other symptoms such as vaginal itching. Again, only a doctor can determine the cause of the bleeding.

"The degree of seriousness depends on the type, amount, frequency of bleeding, and whether the pregnancy has had any complications," Jennifer Aquino, M.D., an OB/GYN and clinical assistant professor in the department of obstetrics and gynecology at NYU Langone Health, tells Romper. "An example of light bleeding is spotting only when wiping. Bright red bleeding or heavy bleeding (as heavy as a period) with cramping is more concerning for pregnancy loss."

In the second trimester, heavy and/or bright red bleeding often signals a problem with the placenta, explains Dr. Aquino. Placenta previa, a condition in which all or part of the placenta covers the cervix, is one such concern. Another, less common complication is placental abruption, where the placenta actually tears away from the uterine wall. When a placental abnormality is suspected, the mother is usually sent to the hospital for a period of observation and fetal monitoring, says Dr. Svets. Depending on the position of the placenta, the amount of bleeding, and any indications of fetal distress, an emergency C-section may be necessary for the sake of both mother and baby.

"Bleeding can also be a sign of preterm (if less than 37 weeks pregnant) or term labor (if greater than 37 weeks)," says Dr. Aquino. Other signs of preterm labor, according to the American College of Obstetricians and Gynecologists, include consistent backache or abdominal cramps, abdominal pressure, contractions, or water breaking. Depending on how far along the pregnancy is and the condition of mother and baby, the mom may be put on bed rest, or given medication to help the baby's brain and lung development and prevent cerebral palsy. In about 30 percent of cases, the labor stops by itself, although one in 10 women do give birth prematurely within a week of the onset of preterm labor.

The doctors we spoke to stressed that when you're pregnant and notice spotting, it's important not to ignore it or to self-diagnose, no matter how far along you are or how slight the bleeding is. "Women should contact their OB/GYN for any bleeding at any time during pregnancy," stresses Dr. Aquino. Even if the cause is as simple as a yeast infection or a too-enthusiastic night of lovemaking, you'll still need to be treated and to go for a follow-up appointment to make sure you and the baby are doing well.

More Like This
Can You Bowl While Pregnant? Experts Weigh In
Everything To Know About Pilates During Pregnancy
Pitocin Induction: What It Is & The Play-By-Play
Considering Getting A Tattoo While Pregnant? Here’s What To Know