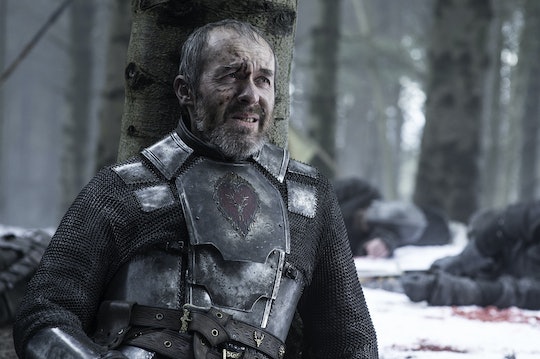 Is Stannis Dead In 'Game Of Thrones' Season 6? Multiple People Want Him Gone

Most Game of Thrones fans are concerned about whether or not Jon Snow is still alive, but there's someone else's possible death we need to discuss. When Season 5 ended, we saw Brienne Tarth — the bad ass to end all bad asses — with her trusty sword, Oathkeeper, ready to swing and hit Stannis with a deadly blow. But then the screen cut away, because Game of Thrones likes to leave us with unanswered questions for a year.So is Stannis dead in Game of Thrones Season 6?

Well, Brienne has been trying to kill him since Renley Baratheon was murdered back in Season 2, so it seems highly unlikely she would hold back. Plus, after Stannis killed his daughter, Shireen, it's not like anyone really wanted to see Stannis live anyway. Sure, it'd be helpful to Sansa and everyone else going against the Boltons and Lannisters, for Stannis to still be alive, but since his army definitely lost to the Boltons, Stannis wouldn't really have power any more, anyway.

While this is all true, there still remains one question. If Brienne really did kill Stannis, why didn't they just show it? Why cut away and leave it open-ended if they'll just reveal that Stannis is dead in Season 6? We've seen multiple people get killed on this show (RIP Starks), so it's not like Game of Thrones suddenly got soft and decided not to show another murder.

So why cut away from Brienne and Stannis (and Podrick) unless Brienne didn't actually go through with it? It doesn't make sense. Therefore, Brienne probably didn't kill Stannis no matter how much I would've liked her to. The better question surrounding Stannis and Brienne is why would Brienne keep Stannis alive?

Maybe she plans to use him as a bargaining chip. Or she decided the Game of Thrones world is a hot mess right now and Stannis is the lesser of multiple evils. Or maybe Brienne decided leaving Stannis in the woods to be taken or killed by the Boltons was a much better punishment for him than just killing him with one striking blow.

Either way, even if Stannis is alive at the beginning of Season 6, I doubt he'll last very long. If Brienne doesn't kill him, the Boltons will, and if they don't, Davos surely will. Honestly, if Stannis somehow survives Season 6, Game of Thrones is not the show I thought it was. This guy is on multiple hit lists.