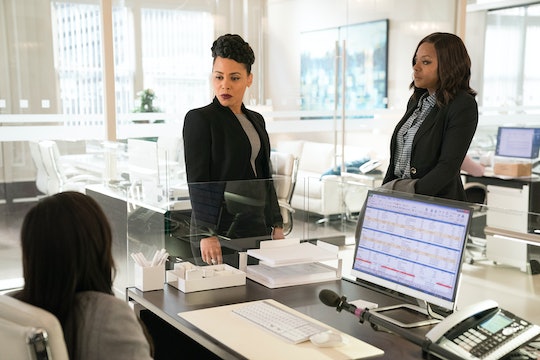 As many twists as there have been this season on How to Get Away with Murder, the death tally has been surprisingly low when compared to other seasons. Unfortunately, this can only mean that there will be at least one more before the Season 4 finale is over, and I’m not so sure it’s going to be Bonnie. Instead, it might be someone else, who’s a lot more innocent. Some people are starting to suspect that Tegan is dead on How to Get Away with Murder and it's a theory that could tie up a few loose ends. Tegan has made it clear that she had no intention of working with Michaela and Annalise or cooperating with them in any way — a decision that may have grave consequences.

Redditor luvprue1 pointed out that while Bonnie feels the obvious victim of the car crash at the end of the episode "The Day Before He Died", Tegan is the one whose passwords and key cards were used to access Jorge’s business files on the night of Simon’s accident, therefore she was in danger right from the start. Ever since her information was used by Oliver and Laurel to get Antares’ records, she became a liability. And honestly, it makes a lot of sense, however it will mean saying goodbye to the only other attorney who’s been able to hold a candle to Annalise.

And just in case anyone has any hope that the victim of the crash survived, series creator Pete Nowalk tweeted that there will definitely be one more death before the finale is over.

Every time Michaela confronted Tegan following Simon’s accident, Tegan was visibly shaken or upset. Granted, she probably had every right to be, seeing as how the company's digital security was breached and she looked guilty of conspiracy, but there seems to have been more to it than just that. Like when Michaela confronted Tegan in the bathroom at the hospital and Tegan seemed almost afraid as Michaela tried to get her to understand what was going on without really telling her everything.

When Simon later fired her as his attorney, it seemed like Tegan was concerned with more than just keeping him as her client. She seemed almost worried when he fired her. I’m not sure how that ties into Jorge exactly, but it does show that Tegan may have known more than she let on or knew that she was somehow in danger since she was the head attorney on the Antares account.

It’s also important to note the color of the car in the accident at the end of last week's episode. It appeared to be a silver luxury car, at least from what was shown in the fleeting scene. Earlier in the episode, Bonnie was concerned about the safety of her own car, but it may have been a different vehicle. Yes, she was shown talking on her phone in a car on the way to Annalise’s hotel with pertinent information on Denver, but that makes it too easy to fit the pieces together with Bonnie being the victim of the car accident.

Denver had also called Jorge after watching the security camera footage of Bonnie getting information for Annalise and told him on the phone, "She’s at it again… Well if you don't handle it, I will," shortly before Nate called Annalise with news of the crash. I have no doubt in my mind that Denver was referring to Bonnie that Jorge needs to "handle," but that it’ll be done in a different way. Bon-Bon is a HTGAWM OG, after all, so I can’t see her going out this way.

Again, it would be a tragic end for Tegan, who could have been like an Annalise 2.0 but without all of the murder and crime. Right now, though, she’s one of the more expendable characters whose death would not necessarily shake things up too much and would instead help bring an end to the Antares plot once and for all.