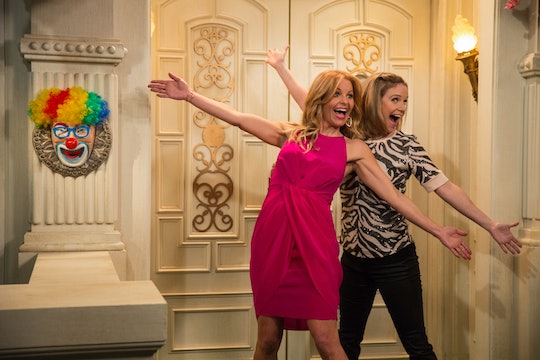 Warning: This post contains spoilers from Season 3 Episode 1 of Fuller House. Just in case you were worried that Netflix's Fuller House would be losing some steam in its third season, the first episode opened with a hilariously cute musical number led by everyone's favorite character (and D.J.'s "favorite" son) Max. This show seriously can do no wrong. But is the Fuller House cast really singing in Season 3's opening number, "Best Summer Ever?"

Of course they are! Well, maybe. There hasn't been an official confirmation about whether the cast is really singing, but based on other musical numbers throughout the series, I'd have to guess that the "Best Summer Ever" song and dance is no different than all the others. The Fuller-Tanner crew are always singing. So why stop now?

This might be the best ear worm yet though, as it seemingly sets the tone for the whole season. It begins with adorable little Max waking up and realizing that it's the first day of summer. He started off by saying that it's not like he doesn't like school — he does have Tanner genes after all — but who doesn't love summer? (No one, that's who.)

After getting his brother Jackson and Kimmy's daughter Ramona in on it, the crew made their way downstairs, where all the grown-ups joined in to help them welcome three months of absolutely no school or plans.

It becomes pretty clear eventually that this all just a dream — Steve, Matt, Jimmy, and Fernando all show up as different superheroes, for example. Even Cosmo seems to be singing along at certain points. Even so, with all the glitter and high notes, how could this not be the best summer eveeeeer?

Well, it's not exactly starting out so great for everyone. Ramona disinvites Kimmy to an amusement park with her. Meanwhile, D.J. and Matt can't seem to find any time to be alone without work or kids getting in the way and Steve's trying to get married in Japan (and you know D.J. has some feels about that). In addition to all of that, Jimmy has to move his R.V. into the Costco parking lot and Jackson? The eldest Fuller has to go to summer school. Which might be the best plot device for the season so far.

He was planning on being "Relaxin' Jackson" and spending the summer on the couch watching TV, but since he got a D in history, he has to go to class. At first, it looked promising. There's a girl named Rocki who seems to take him under her wing and show him the ropes. Instead? Rocki turns out to be Gia's daughter (you know, from the Girl Talk days?) who draws a cat face on Jackson with permanent marker when he falls asleep in class.

Of course, he probably shouldn't have fallen asleep in class or failed history in the first place, but this does mean that viewers might get Rocki and Gia all season long. With Marla Lynne Sokoloff reprising her role, she might actually make it the best season, if not summer, ever. Sure, she's not very nice to D.J. and kind of a bully, but in a totally adorable Fuller House-type way. Maybe Max knew what he was talking about when he said it was going to be the "best summer ever."

Since this is Fuller House, there's going to be some ups and downs, of course. Jodie Sweetin, who broke her ankle and tibia in a real life accident, wasn't healed by the time they started filming the season, so they had to write the injury into the show. Sweetin said, "There's no hiding that I can't walk. And I can only be a houseplant in so many episodes where I'm just stuck somewhere."

So who knows what kind of disaster the writers will conjure up to "break" Steph's leg all over again. Judging from the first musical number and all of the action in the first episode, there's no doubt they'll think of something.