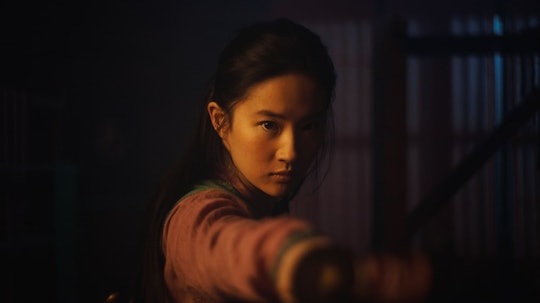 Mulan, one of the most anticipated remakes to come from Disney in recent years, is officially heading to Disney+ on Sept. 4. But if you were looking for a faithful homage to the original 1998 animated version, full of musical numbers and a little romance, you may find yourself a little surprised. So is the 2020 live-action version of Mulan appropriate for young kids? Mulan's story is just as riveting and inspiring for kids, but this time around, younger viewers might need to wait until they're a little older to really enjoy the movie.

Starting on Sept. 4, the live-action remake will be available to stream on Disney+ for an additional $30, which gives you Disney+ Premier access to the film. (If you'd prefer to not shell out the extra fee, hang tight for a few more months when the new Mulan is added to the Disney+ library on Dec. 4 for all subscribers to watch for no extra cost.)

But before you sit down to watch the new Mulan with your little ones, you may want to consider a few things, including its rating. As noted by Variety, this movie is Disney's first live-action remake to earn a PG-13 rating due to "sequences of violence."

The 2020 version of Mulan stays true to the original Chinese poem The Ballad Of Hua Mulan, a story about a young girl who disguises herself as a man to go to battle in her father's place to honor her family. Unlike the 1998 animated classic, however, Mulan (played by Liu Yifei in the remake) battles without the help of her Eddie Murphy-voiced dragon pal Mushu or peppy sing-a-long songs like "Honor To Us All." (Yes, the remake does not feature a live-action version of Mushu and it's not a musical like the original.)

According to Common Sense Media's review of the film, the new Mulan is "much more serious and intense" than the 1998 version, adding that the remake is "more violent, with both large-scale and one-on-one battle sequences that leave people dead and injured and a few close calls when main characters seem on the verge of death."

Even with all the changes, the new Mulan is a sweeping, visually stunning film. It's full of intricately choreographed fight scenes and a new, menacing villain, a shape-shifting sorceress named Xianniang. All of these elements, however, could potentially frighten young kids or be too mature for them to fully comprehend. Common Sense Media recommends the film is best for kids 11 years old and up.

So, with all that said, perhaps the 2020 version of Mulan is the type of movie parents and older kids can watch after the little ones go to bed. Even with a PG-13 rating, Mulan's revamped story is one worth watching, even if little ones need to wait a few more years to do so.