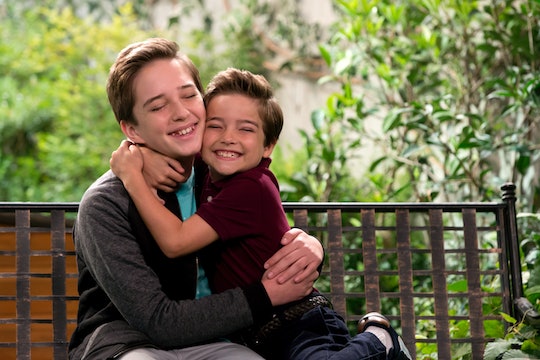 When the first half of Fuller House Season 3 ended in an epic cliffhanger, I realized that more than anything, I am here for the underlying drama. Well, that and the hidden adult jokes, but that goes without saying. Even so, it’s always nice to have the subplots surrounding the kids that seem to be resolved within single episodes, like Max’s obsession with the epic-looking Troller Coaster. But is the Troller Coaster from Fuller House a real ride? It looks like it belongs in a real life amusement park and I would totally be down to ride it if it was real, but it looks like it was made up just for the episode. Warning: Season 3, Episode 11 spoilers ahead!

The Troller Coaster may have also been made for the sake of bringing Max and Jackson closer together as brothers and also the perfect plot device to allow D.J. and Steve’s relationship woes to drag on for a longer period of time. But when it’s all said and done, the Troller Coaster from Fuller House seems most similar to the Seven Dwarfs Mine Train Roller Coaster at Walt Disney World's Magic Kingdom. I mean, it was a little more thrilling and creepy than the real life ride, but if you look at the structure of the two-person cart and the interior inclines and dips of the Troller Coster, you can't deny the strong resemblance to the Seven Dwarfs ride, which may have been a source of inspiration to this fictional thriller.

Again, the dwarves you see mining inside the makeshift caves in the real life ride are a lot less sinister than the trolls of the the Troller Coaster, but it’s kind of the same idea. There’s also the Quicksilver Express Mine Coaster at Gilroy Gardens in San Francisco, but it takes place mostly outside and even though the Troller Coaster isn’t the scariest I’ve ever seen, the Quicksilver is even more tame.

The Demon at California’s Great America also has some aspects of the Troller Coaster, like the dark makeshift caves and general thrill, but it also seems just a tad more intense. Near the San Francisco area alone, there are a few different amusement parks, including Six Flags Discovery Kingdom and California’s Great America, one of which may have been modeled after the park that housed the Troller Coaster. But it seems like the ride was designed solely for the purpose of the episode.

Though it wouldn't be the first time that the characters of the Full House universe showed their interest in thrill rides. During the original series, there was the big two-part episode where the entire Tanner and Katsopolis (and Gladstone) family went to Disney World, though in that case, the episodes were filmed at the actual real life amusement park. Maybe Netflix didn't see it totally necessary to involve the famed park for a relatively short scene, but it’s totally possible that the inspiration for the Troller Coaster was drawn from some real life rides that amusement park patrons already know and love.

Basically, the ride seems to represent other moderately thrilling coasters that take hilarious pictures of you at the height of your fear and has a two-person cart to take you along the entire ride.

In the episode itself, the Troller Coster might have been meant to be more than just a reasonably thrilling and relatively creepy ride. It gave Max and Jackson the chance to bond outside of the Fuller household. For me, it also symbolized Steve and DJ’s relationship since the reboot of the original series began.

They’ve quite literally had a roller coaster of a relationship, with plenty of ups and downs, and uncertainties all around. At different times, they’ve both been afraid of taking the leap to make things work between them. Right now, it seems like things will probably fall into place for them by the end of the season, but in the meantime it was fun to see them have a little fun together while they try to figure things out.