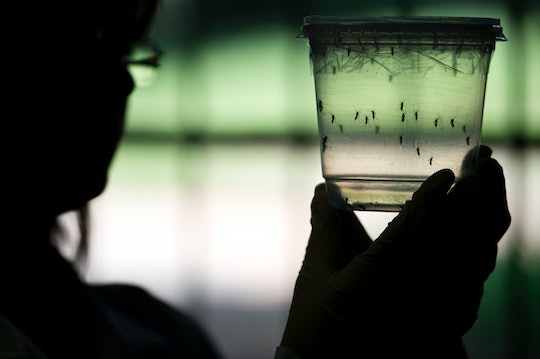 Is The Zika Virus In The U.S.? What You Need To Know

After the recent outbreak of the Zika virus in Brazil, the CDC has issued a travel advisory for pregnant women in the U.S. to avoid 14 different countries, including Mexico and Brazil. The virus is transmitted by mosquitoes and thought to be linked to a rise in cases of microcephaly in Brazil. Microcephaly occurs when infants are born with abnormally small heads and brains, resulting in severe developmental disabilities and even death. With so many cases of the illness throughout Central and South America, many are wondering, has the Zika virus been found in the U.S.?

According to The New York Times, the first U.S. case of Zika-linked infant brain damage was reported in Hawaii on Jan. 15. A baby whose mother lived in Brazil while pregnant last May and contracted the virus then was born with microcephaly. Since then, an active case of the Zika virus was discovered in a Texas woman, Fox News reported. The Houston resident recently returned from travel to Latin America. And The Washington Post reported that Zika has been found in two pregnant women in Illinois and three non-pregnant individuals in Florida, all of whom recently traveled to Central or South America. All of that said, there is no record of Zika being transmitted within the U.S. — yet. But it is likely coming. This week the World Health Organization predicted that Zika will spread to every country in the Americas except for Canada and continental Chile, CNN reported.

According to the CDC, the Zika virus is spread by Aedes mosquitos, the same mosquitos responsible for spreading West Nile and dengue viruses. They are found in every country in the Americas except Canada and continental Chile, according to CNN, and bite mostly in the daytime. Zika infection occurs when one of these mosquitos bites an infected person and then bite a non-infected person. Zika symptoms include fever, rash, joint pain, and conjunctivitus (pink eye), but only one in five people infected manifests these symptoms. There is no vaccine or cure for the virus, which stays in the body a few weeks. Symptoms typically last for about a week.

On Jan. 22 the CDC issued guidelines for pregnant women regarding Zika. Women in any trimester of pregnancy are advised to postpone visiting any country where Zika has been transmitted, and if they do visit those countries, wear long-sleeved shirts and pants and insect repellants registered with the U.S. Environmental Protection Agency (EPA). They are also advised to sleep in rooms with air conditioning or window screens. Pregnant women who have already visited a country where Zika is known to have been transmitted should be tested for the virus if they have symptoms; testing isn't recommended if a woman has no symptoms. If a pregnant woman tests positive for Zika, the CDC advises regular ultrasounds to measure fetal growth.

On Tuesday, the CDC also released guidelines for testing infants possibly infected with Zika in utero. Also Tuesday Yahoo News reported that, in light of the anticipated spread of Zika to many parts of the U.S., the National Institute of Health is ramping up studies of the alleged link between Zika and microcephaly to see if Zika does in fact cause the condition.

Bloomberg News reported that in response to the outbreak, El Salvador, Ecuador, Colombia, and Jamaica have advised women to delay becoming pregnant.