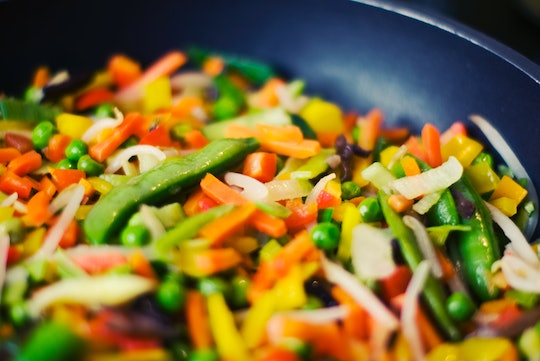 Is There A Cure For Listeria? Thankfully For Parents, It's Treatable

This ever-expanding listeria recall has me wondering whether I can ever trust a grocery store again. Incredibly high prices are one thing (lookin' at you, Whole Foods), but when people are getting sick from everyday products like frozen veggies and granola bars they bought at some of my go-to stores, like Kroger, Trader Joe's, and Safeway, I really start to worry. Many of the recalled foods were packaged at a Washington state plant of a company called CRF Frozen Foods, and many of the ensuing recalls were issued because officials are exercising an abundance of caution. But it's also true that eight people have been hospitalized and that a listeria infection kills one in five victims, so it's really, really important to know: Is there a cure for listeria?

The good news is that it's definitely treatable. The even better news is that most people who eat food that has been contaminated by listeria have strong enough immune systems to avoid ever even getting an infection. So, parents, stay vigilant, but relax: If your kid ate one of those now-recalled Quaker Oats granola bars or a broccoli and kale salad from Trader Joe's (although, let's be honest, not many kids would do that), it could be no big deal.

According to the Centers for Disease Control and Prevention, if a person who has eaten affected foods does not exhibit symptoms, there is no need to pursue treatment. And kids likely won't. The CDC identifies pregnant women, newborns, older adults, and people with weakened immune systems as those most likely to develop listeriosis, the infection that listeria could cause. And who may have a weakened immune system? The Mayo Clinic says that category includes people who are undergoing chemotherapy, have diabetes or kidney disease, and people taking medication to block rejection of a transplanted organ.

So, not most young kids. If they do get sick, though, antibiotics fight listeriosis. If kids (and adults) experience fever, muscle aches, nausea, or diarrhea, it could be time to hightail it to the doctor's office. And while some symptoms could manifest within just a few days of eating a listeria-riddled product, they could also hold out for as long as two months. So when this listeria recall ends (it will, right...?), it's definitely important to continue to watch out for signs of an infection. And start exclusively eating food grown in your own backyard garden. OK, maybe not.

Although kids are probably all going to be fine, it's essential to seek medical treatment and get ahold of those antibiotics if they do begin to show signs of symptoms. Untreated listeriosis can get into a child's nervous system, and that's serious. It leads to leads to stiff neck, headaches, confusion, convulsions, and vertigo. It's also worth noting that a listeria infection can cause miscarriages and stillbirths for pregnant women, so medical attention is a must for them.

The listeria outbreak is certainly daunting, but it's also encouraging that the companies and organizations like the Food and Drug Administration are coordinating efforts to inform the public of risks and remove tainted products from the shelves. Stay on top of which foods have been recalled, be on the lookout for possible symptoms, but don't panic! It's treatable.