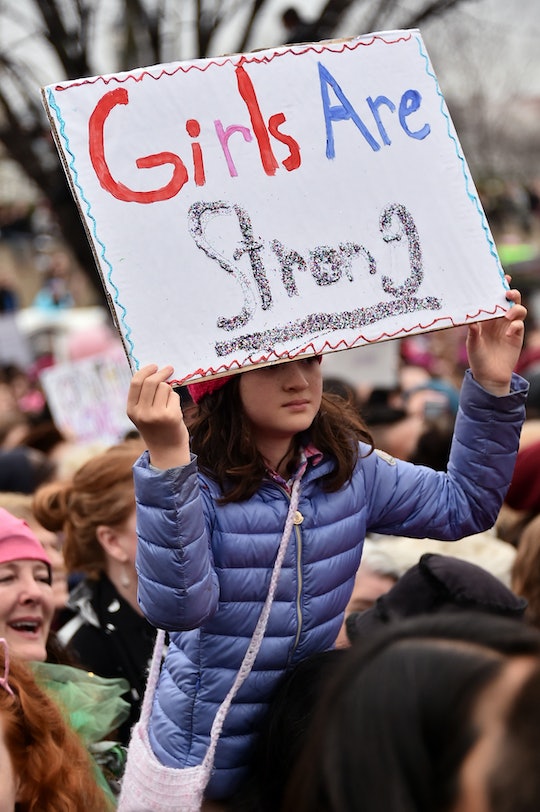 The Women's March Jan. 21 attracted millions worldwide, and they ultimately showed President Trump and his administration that they will not stop fighting for justice for all people, no matter what. In following up on that promise, march organizers and other activists are promoting and planning for women's strikes and other forms of resistance to underscore the integral nature of the work women do as well as to advocate for fairer workplace treatment for everyone — from trans women to sex workers to mothers and Indigenous women. And after the nation's capital served as the epicenter for the marches that launched the movement, there will certainly be national women's strike events in Washington D.C. — as well as in more than 30 countries across the globe.

There are two driving forces behind the women's strikes, planned for International Women's Day March 8. The diverse group of women behind the Women's March are gearing up for A Day Without A Woman, which aims to "highlight the economic power and significance that women have in the US and global economies, while calling attention to the economic injustices women and gender nonconforming people continue to face," according to the movement's website. The grassroots International Women's Strike (IWS), similarly represents "feminism for the 99%," as its founders wrote in a Guardian op-ed recently.

The IWS and the Day Without A Woman initiative — both of which advocate for causes like equal pay for equal work, reproductive freedom, and securing paid family leave — encourage women to take part in protests, rallies, and perform even volunteer work instead of engaging in their normal paid or unpaid labor. It's more than likely that only privileged women who can afford to forfeit a day's wages or know they won't be fired for skipping work will be able to do that — a point that both entities acknowledge. Others can wear red in solidarity and refrain from shopping at places that aren't women-owned or local; men can even speak up about issues like equal pay to decision makers at work.

Strikers in D.C. can make their voices heard in an entirely different way, though. The International Women's Strike is planning protests throughout the country on March 8, with one centered around a controversial abortion policy scheduled to end up right outside the president's door. Marchers in the capital will come out to oppose the "Global Gag Rule," which Trump reinstated just days after taking office. It bars foreign organizations that accept funds from the United States government from even talking abortions with patients, let along perform them — a move the IWS condemns as "just the first of many attempts the Trump Administration will make to strip away our sexual and reproductive health, rights, and justice."

The march starts at 11 a.m. March 8, with participants meeting in D.C.'s Freedom Plaza before heading to the White House and protesting in Lafayette Park. Organized specifically by the Center for Health and Gender Equity, the Washington D.C. event is one of many, many others throughout the United States and the world — just as the strike day itself is one of the many ways to resist Trump and inequality in general.