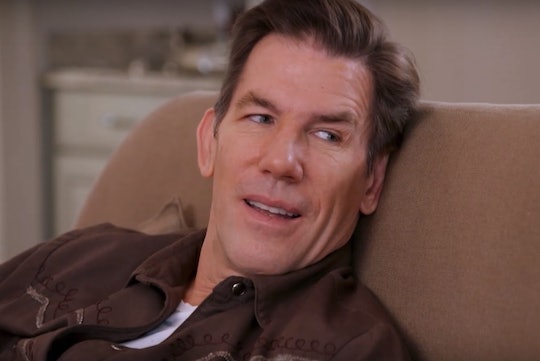 One of the biggest storylines for season five of Southern Charm has been Thomas Ravenel and Ashley Jacobs’ relationship, along with Ashley clashing with Thomas’s ex-girlfriend and baby mama, Kathryn Dennis. But since Thomas and Ashley’s relationship seems to have stood the test of time (and reality TV), is Thomas proposing to Ashley? The Southern Charm couple could be ready for the next step, especially since Ashley was ready for the cross country move that being with Thomas meant at the start of their relationship.

Shortly after they met, she packed up her entire life in California and moved to South Carolina to be with him and become a part of his life. Of course his life also includes the cast of Southern Charm, who are his friends in real life. But since Ashley has also clashed with some of those friends this season, including his ex, Kathryn, wedding bells may not necessarily be in the future for Ashley and Thomas.

Just like in real life, you have to be able to get along with the important people in your significant other’s life if you want things to work. If Ashley isn't exactly close with any of the other cast members on the show, that could mean bad news for her relationship with Thomas. As of right now, they haven't officially broken up or anything, but as far as Thomas actually proposing to Ashley, I’d say it may not be happening anytime soon.

When Southern Charm season five premiered back in April, both Ashley and Thomas were quick to post photos of each other on their respective social media accounts and do all of the things most new couples do to show off their new relationship to the world. Lately, however, both of their Instagram accounts are a little bare of photos of each other, which could mean that they’ve simple settled into a comfortable relationship that enables them both to have independence, or that things aren't going so well. Luckily, it seems to be the former rather than the latter, as Ashley told Bustle that her relationship with Thomas is better than ever.

"I think [Thomas and I] are doing better now that I am working," she said. The Southern Charm newcomer was a nurse back in California and has now officially gotten an nursing job in Charleston to really put down roots for herself. "He respects me more. I’m independent. I’m paying my own rent. He’s ... in a place where if he was to walk away … I would be OK. He knows I don’t need him."

Despite their relationship still going strong, Thomas might still not be in love with the idea of proposing to Ashley. He’s only been married once in the past, literally 20 years ago and for just 13 months. Since then, he’s avoided marriage and even though he started a family with Kathryn, marriage was never on the table for them either. That’s not to say that couples who have kids together need to be married by any means, but if Thomas wasn't considering marriage in that particular relationship, he probably isn't right now.

Ashley and Kathryn also don't have the best relationship at the moment. As seen in the epic Hilton Head showdown on Southern Charm, both women had words for each other and made their opinions of one another abundantly clear. In order for Ashley to really be a part of Thomas’s family and be accepted by all, she’s going to have to make amends with everyone important to him in his life.

Then again, there is the chance that Thomas is planning a secret proposal and literally no one sees it coming, but as of right now, all signs point to the couple simply enjoying their life together without rings or a slip of paper to tell them to.