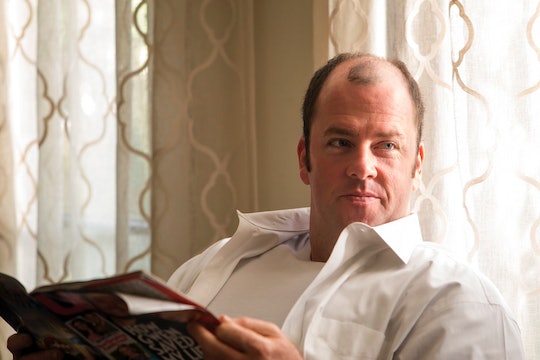 Toby Needs To Survive On 'This Is Us'

In the winter finale of This Is Us, it was the coffee table collapse heard around the world. Or, at the very least, heard in the homes of the many already dedicated fans of the show. But after his fall and seemingly very serious heart attack, is Toby alive on This Is Us? Not only are fans not ready to let the light-hearted and super sweet man in Kate's life go, but his co-stars, mainly Chrissy Metz (Kate) are hoping for Toby to be alive too.

Although no one was able to spill the truth, or given any type of real spoilers to lean one way or the other, This Is Us creator Dan Fogelman told Entertainment Weekly, "We’re not going to drag out Toby’s fate. You find out if he made it in the first five minutes of the episode." In a way, that's something of a relief, but it doesn't really give fans any clues as to whether or not Toby makes it through the emergency surgery he was going through at the end of the midseason finale.

But I find it hard to believe that, if they were going to kill Toby off for good, that they'd do so right off the bat when the show returns. That whole deal has a drawn out, tear-riddled episode kind of ring to it, so it's more than likely that at the beginning of the episode, viewers will find out that Toby is alive and well on This Is Us.

It also looks like the new episode of This Is Us will be flashback heavy, with scenes of Jack and Rebecca dealing with the pregnancy and settling into a more domestic life in preparation for their upcoming triplets — once they find out that they'll be having "the big three," that is. So with all of that going on, the present-day fate of Toby will hopefully be settled in a positive way, in order for some of the focus to be put on Jack and Rebecca in the past.

Metz also spoke to Entertainment Weekly about Tuesday's return and about Toby's fate on the show. Of the outcome, Metz said, "You know, I understand the answers. And why they chose to do what they wanted to do," but added that of the fans, some may be satisfied and others may not be so happy with the result. Which, once again, could mean literally anything.

But as cryptic as the writers and stars of This Is Us have been regarding what happens, the build up of Toby and Kate's relationship has been much too strong to see him go in the first few minutes of the new episode. Have some faith, people — Toby will prevail.