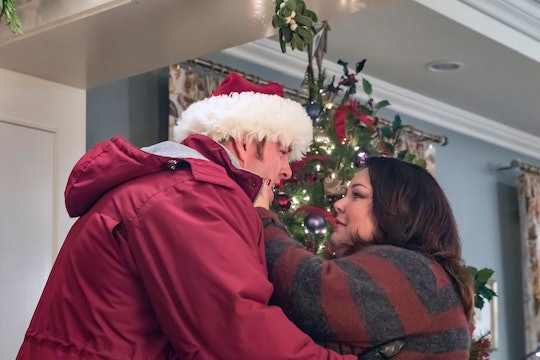 There's Still Hope For Toby On 'This Is Us'

With the way fans are already so devoted and invested in the characters of This Is Us, its hard to believe that the show is only on its first season. But such is the case, making the cliffhanger of the winter finale that much harder to handle. And even though it definitely looked like Toby wasn't going to make it on the operating table, there are some clues that Toby isn't dead on This Is Us that might help calm some nerves before the show returns Tuesday night.

Unfortunately, seeing photos or videos of Chris Sullivan (Toby) around the set of This Is Us isn't exactly enough to mean that Toby is alive and well, since the show has a way of resurrecting people via flashbacks and drug-induced visions. But it's still always a comfort to know that Sullivan is at least in the studio, working on the show in some way that might be more than just a lifeless or comatose body in a hospital bed.

Sullivan tweeted a video of the Paramount Studios lot at the beginning of December, meaning that he was definitely there, but it still remains to be known in what capacity. Still, it would be very cruel of the This Is Us writers if they spent the first half of the season building up the relationship between Kate and Toby, only to have it all shattered on freaking Christmas Eve of all days. (Then again, this show tends to pride itself on emotionally wrecking us each and every week, so maybe killing him off so suddenly is right up their alley.)

Luckily, the clues that Toby isn't dead and could very well survive this apparent heart attack are legit enough to let out that breath most fans have been holding since the midseason finale. For example...

There's Potentially Already A Big Death On The Horizon

The biggest expected death for Season 1 of This Is Us has been William, Randall's birth father. When Randall found him, he was already suffering from stomach cancer and although he started on medication and moved in with Randall and his family, it's obvious that the man has continued to succumb to his disease. So if the big death coming to the show is going to be William, is there really room for another tragic death to take place and impact everyone so soon into the series?

Chris Sullivan Has Been On Set

The biggest clue about Sullivan being around for filming has been his tweet in the studio lot. Now, this could mean that he was there to simply show support, film some flashbacks, or die on the operating room table. But since none of those are ideal, let's assume that it means he was there to play a very much alive Toby, even if that Toby takes a while to recover from his heart attack.

His Episode List For This Year Tells A Story

According to IMDB.com, Sullivan is scheduled to appear in at least four episodes coming into 2017, and so are Metz and Justin Hartley (Kevin). So judging from that alone, it might be safe to say that Toby is alive on This Is Us. Each of the actors are scheduled to appear in the same four episodes that are listed for the month of January and right now, IMDB hasn't gone beyond those.

Chrissy Metz (Kate) May Have Revealed An Answer

Call it wishful thinking, but Metz spoke to Entertainment Weekly about Toby's fate and answered the big question as best as she could. But in doing so, she may have revealed something positive. Metz told the magazine of the big Toby reveal, "Some people will be relieved and some people… might not be."

Now, that could mean that fans will be relieved because the truth of his death is finally out there, but it could also mean that some fans are happy about Toby being alive, while others wanted him to be gone. (What monsters would want that?!) It's no secret that Toby has been something of a strong force in Kate's life, edging in on her weekly football tradition and failing to give her space when she wanted it, making some fans a little anti-Toby, so I guess it's possible that some would be disappointed by his survival.

Luckily, viewers won't have to wait much longer to find out Toby's fate on This Is Us, and honestly, it's way too soon for him to die, so #PrayForToby.