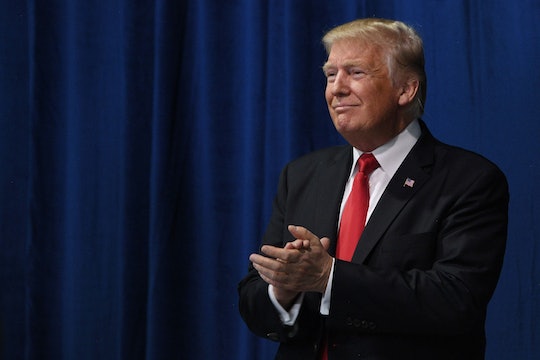 The Plot Of 'AHS: Cult' Could Grab Trump's Attention

When Ryan Murphy teased that Season 7 of American Horror Story would be about the 2016 election, some fans wondered how much truth there was to that statement, while others no doubt worried that the new season would be far too political. As seen in the trailers for AHS: Cult, though, it’s still a horror-based series, while the election is the jumping off point for many of the characters, regardless of whether or not they liked the results. But given its political undertone, is Trump watching AHS: Cult?

The new season begins with the 2016 election and from there, the characters deal with the aftermath of how Trump's presidency is received with each person, and as you can imagine, there’s a lot of worry and stress when it comes to the characters of AHS: Cult and how they react to the election results. (And you know how Trump loves to discuss the election results.) Honestly though, it’s difficult for me to picture Trump hunkering down every Tuesday night for some AHS, especially since he's not exactly painted in a positive light. In fact, Sarah Paulson’s character has recurrences of her extreme clown phobia because of her anguish over Trump being elected as president.

Just because Trump probably isn't going to be watching AHS: Cult, though, it doesn’t necessarily mean that he won’t be talking about it. Or, you know, bashing it on Twitter.

In the past, Trump has been quick to criticize the way he’s talked about on Saturday Night Live and even talk shows, so once AHS: Cult premieres Tuesday night, there’s a good chance that Trump could take to Twitter to speak negatively about it.

Even so, I don’t see the president actually watching the new season of AHS. Personally, I still have shows I’m supposed to start watching or catch up on and my schedule is nowhere near as busy as Trump’s is supposed to be. But, as Murphy said in a recent AHS press event:

The season really is not about Trump, it's not about Clinton. It's about somebody who has the wherewithal to put their finger up in the wind and see that that's what's happening and is using that to rise up and form power, and using people's vulnerabilities about how they're afraid and don't know where to turn, and they feel like the world is on fire.

So in a way, Trump has no reason to feel the eventual offense that comes with being portrayed in pop culture, should he catch the Season 7 premiere. But if we're being honest, there’s still little chance of that even happening.