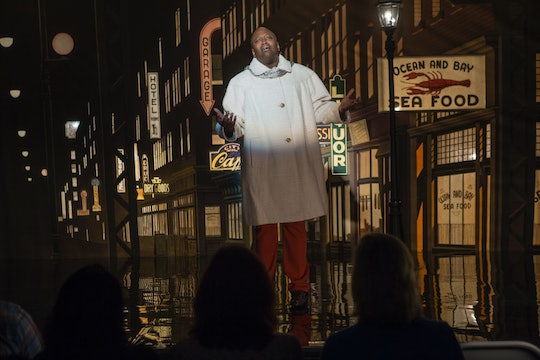 Titus Makes His Commercial Debut On ' Kimmy Schmidt' — Sort Of

Unbreakable Kimmy Schmidt is no stranger to spoofs of pretty much anything or making jokes about current events that hit very close to home. So when Titus’ voice became part of the campaign for an overactive bladder medication on Season 3 Episode 7, it was only natural to ask, is Urethrex from Unbreakable Kimmy Schmidt a real drug? It might be one of Titus’ biggest gigs yet, even if he gets no say (and no pay) in it, so that’s definitely a bummer. But the ads in the episode brought up some really legitimate scenarios that you’d see in a real commercial for a real overactive bladder medication. So is Urethrex real?

Although having an overactive bladder would certainly prevent you from horseback riding at times, or maybe dancing with your "basic husband," there isn’t an exact drug by the name of Urethrex. There are similar medications, such as Enablex, which may have been the inspiration for Urethrex on Unbreakable Kimmy Schmidt.

According to the website for Enablex, it’s meant to be used for "the treatment of overactive bladder with symptoms of urge incontinence, urgency, and frequency." Judging by the ad on Unbreakable Kimmy Schmidt, that seems about right. So while there is no Urethrex in real life (though that name has such a ring to it), it likely just got its inspiration from something like Enablex.

This wouldn’t be the first time Unbreakable Kimmy Schmidt has taken something from the real world and changed the title or wording to fit in the show’s universe, while creating something original and hilarious. Like Season 3’s "Lemonade" homage by Titus. And basically all of the famed cassette tapes that Kimmy and Titus get in the mail are the generic versions of their real-life counterparts.

For example, there's "Hiking on Sunlight," which is of course the Unbreakable Kimmy Schmidt version of "Walking on Sunshine." Or "I'm Convinced I Can Swim" by Art Smelly instead of "I Believe I Can Fly" by R. Kelly. Basically, with Unbreakable Kimmy Schmidt, anything is up for grabs as long as they can spin it the right way and create something totally unique to the show.

So while there is no Urethrex in real life, Unbreakable Kimmy Schmidt did what it does best and created another fictional product that could very likely come up in future episodes, much like those tapes and that home robot from way back in Season 1 that Titus and Jacqueline buried together.

So you never know — that sassy cartoon version of Titus could make another cameo down the line. I know I certainly wouldn't mind.