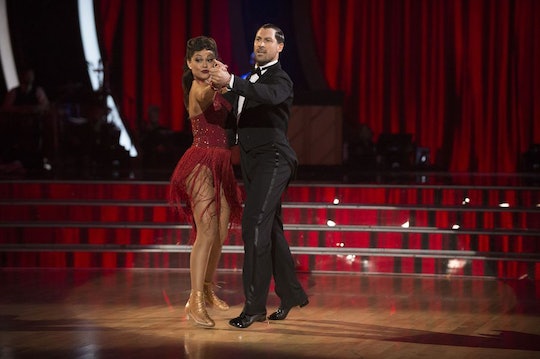 Vanessa Lachey Has No Hard Feelings Toward 'DWTS'

After a shocking double elimination night during Week 7 and a combined score of 54/60, Vanessa was sent packing from the ballroom floor on Dancing With the Stars just a week after her husband and fellow contestant, Nick Lachey, was eliminated. But since she’s hung up her dancing shoes and will no longer be competing this season, is Vanessa Lachey watching Dancing With the Stars? The former contestant might be a little preoccupied at the moment, but that doesn’t mean she doesn’t fully appreciate the time spent working with pro partner Maks Chmerkovskiy.

Vanessa became a co-host and judge of the new Discovery Kids cooking competition show Top Chef Jr. when the new series began this fall and between her time as a mother of three and working on the new show, she’s had to juggle a lot with DWTS thrown in there. So now that she’s been eliminated, it’s more than likely a bittersweet thing, since it means she didn’t take home that Mirror Ball trophy, but it also frees her up a bit. Even so, she’s likely busy enough with everything else going on in her life that watching the show probably isn't high on her radar at the moment.

But that doesn’t mean that Vanessa didn’t learn a lot during the process. Shortly after being eliminated from DWTS, she posted a photo on Instagram, thanking ABC for the opportunity and Nick for supporting her and also added a special note to Chmerkovskiy with: "Thank You @maksimc for some amazing routines and teaching me how to truly dance, not just memorize steps."

Despite rumors earlier in the season that Vanessa and Chmerkovskiy weren’t getting along, the duo managed to work through whatever tension might have been between them and come out shining each week. Even for Week 7, when Vanessa was eliminated, they managed to earn a near perfect combined score, but in the end, even working hard as a pair didn’t afford Vanessa the opportunity to continue on in the competition. Luckily, she doesn't seem to see it as a defeat, but more like an opportunity she experienced and enjoyed and can now say goodbye to as she returns to her own life in full force, including working on Top Chef Jr. and spending time with her family. Those 12-hour rehearsal days were no joke.

Although Vanessa hasn’t said much on her elimination, it sounds like she has zero regrets on the experience as a whole, especially since she made it so far regardless of being voted off before she and Chmerkovskiy could make to the final six couples. Since it’s only been a couple of weeks since she left, though, there’s still plenty of time for her to tune in and catch some of the final performances as the season comes to a close. Plus, she seems like she was close to some of her fellow contestants this season, so there’s no reason to think she won’t be able to catch an episode or two before the season ends to support them.

From the beginning of the season, Vanessa seemed to be working hard toward the ultimate goal of going home with the coveted Mirror Ball trophy, even working though a toe injury which resulted in her toenail coming off during rehearsals. Basically, she was in beast mode most of the time and her scores reflected that.

Unfortunately, scores aren't everything on DWTS since viewers’ votes really do make an impact, and those votes are likely what did her in on the surprise double elimination night. But even though Vanessa didn't end up winning, she still seems like she enjoyed what the experience gave her.