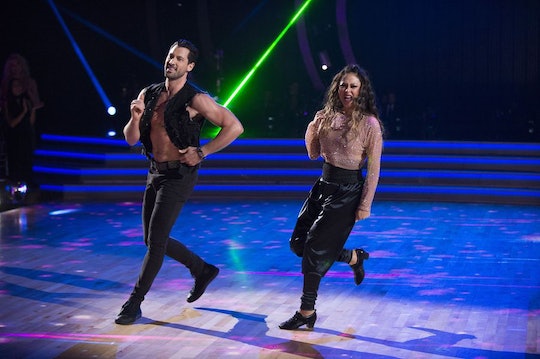 Maks Has Made His Feelings About Vanessa Lachey Very Clear

On Dancing with the Stars, it’s not unusual for the pro to need time off for personal reasons or even injuries, as viewers have seen on both this season and countless seasons before. But with the rumors swirling about Maks Chmerkovskiy’s recent absence having something to do with his relationship with partner Vanessa Lachey, you can’t help but ask, what does Maks think about Vanessa on Dancing with the Stars? By all accounts, he seems to have a real respect for her both on and off the ballroom floor, despite the rumors that the pair haven’t been getting along.

Throughout the past week, various reports have cited their relationship as being the source of the "personal issue" that kept Chmerkovskiy from DWTS for Week 3’s performance. Romper has reached out to Lachey and Chmerkovskiy's reps for comment but have yet to hear back.

The rumor mill started churning out the story that Chmerkovskiy and Lachey don’t get along as a pair and although neither part of the duo have confirmed any problems or drama in their professional relationship on DWTS, sources have claimed otherwise. An insider told Us Weekly of the allegedly quarrelling pair: "Their personalities are very similar so they disagree about everything. They refuse to give into one another. They’re playing nice for the cameras but both are miserable paired with each other."

Basically, what they're saying here is that two people with similar personalities who are also together for the majority of the day nonstop and who have to work extremely closely together might be butting heads. Even if it’s true, it’s more than understandable, but as far as what Chmerkovskiy thinks of Lachey in his own words, he seems to have the utmost respect for his DWTS partner.

Since before DWTS Season 25 even began, Chmerkovskiy was praising Lachey on social media and has continued to do so regularly. After Lachey injured her toe during rehearsals and lost a chunk of her toenail in the process (I know, I know), Chmerkovskiy wrote about her in a pretty heartfelt Instagram caption:

WARNING This video might give y’all the idea that @vanessalachey is one tough chick! I guess after childbirth what’s a little piece of meat and half of toe nail hanging out of off the tip of your big toe while you’re running out of time trying to prepare two dances for Monday and Tuesday on @dancingabc ? [She put on her shoes five minutes later and we kept running the dance].

Even if the reported drama between Chmerkovskiy and Lachey has any truth to it, at the end of the day, the DWTS pair seem to still have a great respect for each other regardless. Chmerkovskiy even took full responsibility for his recent absence from DWTS and tweeted, "As you are all aware, I had to leave the show last week to take care of some personal issues. I take full responsibility for my absence.... And want to apologize to my partner Vanessa. We are both looking forward to dancing for our fans next week!"

And apparently, Chmerkovskiy and Lachey are already back in the dance studio working on their routine for Week 4, as promised. "Maks is back. We saw him and Vanessa today in the studio. They’re excited to be together again," fellow pro Lindsay Arnold said at People’s Ones to Watch Party on Wednesday.

Added DWTS Season 25 contestant and Pretty Little Liars star Sasha Pieterse, "Honestly, they’re awesome, I love them. Nick and Vanessa are awesome so are Peta and Maks. They’re such a fun partnership. I don’t know what’s going on but all I know is that he had a personal issue, a family issue. Alan [Bersten] was great and now [Maks and Vanessa] are reunited."

After Lachey earned a combined score of 24 for her Week 2 dance with Chmerkovskiy, he took to Instagram to give her an affectionate shoutout which included: "Very proud of my partner for getting it done like a champ!"

Clearly, if there is anything going on between the pair that can’t be handled by either of them alone, they’re doing a really good job of hiding it. Chmerkovskiy definitely has a respect for Lachey and the fact that they’re already back at rehearsing together shows that the rumors of the alleged problems between them aren't going to be something they let bring them down.