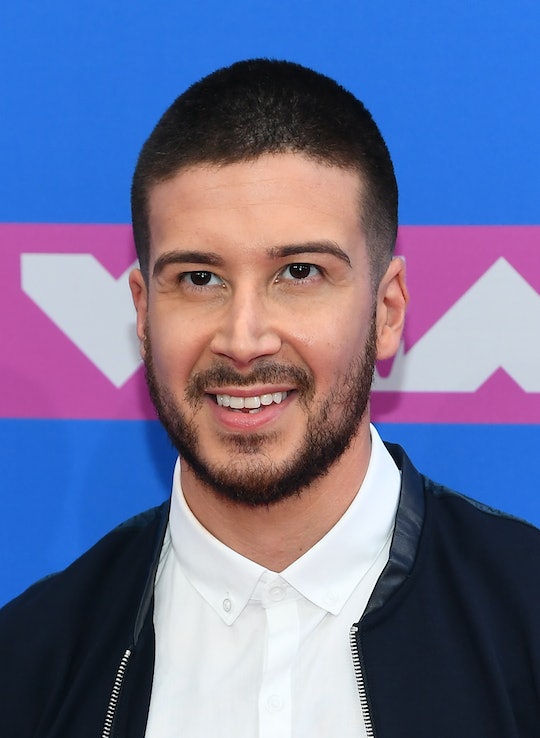 Vinny From 'Jersey Shore' Is On A Search For The Future Mrs. Keto Guido

Vinny and Pauly D, most well known for Jersey Shore, are officially *the* bachelors of MTV thanks to their new dating show, Double Shot at Love. I don't think either of them had a hard time finding dates before this, but there's nothing like a room full of cameras and eligible women to get you in the mood for love. Vinny already had his share of hookups on TV in the past, but is Vinny from Jersey Shore dating anyone now? The Double Shot at Love star might have found something real with one of his contestants this season.

Unlike with The Bachelor, I have feel like that Pauly D and Vinny's show is more about finding someone to date and potentially fall in love with rather than propose to at the end of six or so weeks. So if that's the goal for Vinny this season, it's entirely possible that he met and fell for someone during filming and that they are dating now.

Unfortunately, he hasn't said as much and there are zero clues on his Instagram about his dating life now. The "keto guido" seems to be a master at keeping some aspects of his life private, so for now, fans will have to resort to sheer speculation as to whether or not he's currently dating anyone.

Since there is likely a clause in his Double Shot at Love contract that bars Vinny from talking about who he picks in the end and if he's dating any of the women now, he's been pretty mum on the topic. However, he did speak to People recently about what he looks for in a woman.

Vinny revealed that he wants someone who compliments the "complex" nature of his own personality. So if a woman can Netflix and literally chill one night and then hit up the club and twerk her heart out the next, apparently she's the perfect woman for Vinny.

"I also want someone who’s independent, who isn’t in it for the wrong reasons," he told People. "She has to have so much of her own career going on, she doesn’t need me for anything. I want to be her fan."

Does that mean he wasn't able to find anyone suitable on the show and he's still actively looking for the future Mrs. Keto Guido? That's still unclear, but Vinny does seem to be open to finding a relationship. And since he has such a clear picture of who he wants to be with, it might have made his decision on Double Shot at Love a little easier.

Looking back at Vinny's time on Jersey Shore and Jersey Shore Family Vacation, he doesn't have the best track record with women. He has hooked up with or at least heavily flirted with both Snooki and Angelina. And although he originally went on Family Vacation with a girlfriend back home, the pair later broke up after he displayed some questionable behavior with other women on the show.

He recently appeared on the Boomer and Gio radio show and admitted to sleeping with hundreds of women over the course of his Jersey Shore fame. To be fair, he spent the majority of his 20s as a reality TV star whose time on the show involved constant clubbing. But, he admitted, these days he's more about trying to be in an actual relationship with women.

Vinny said that he has "slowed down a lot" and that he doesn't want to have a one night stand with a woman if he doesn't "want to wake up to them the next day." That's progress at least.

It probably made sense, then, for Vinny to take his talents to his own show with his Jersey Shore BFF Pauly D in an effort to find a new girlfriend. But right now, it's unclear if he's still flying solo or if he's dating someone but keeping it under wraps for the time being.

More Like This
Snooki Hints That A Sunday Dinner With All The Jersey Shore Kids Is In The Works
Khloé Kardashian Shares First Look At Her Son & His Birth
Khloé Kardashian Reveals Tristan Thompson Proposed To Her Last Year & Why She Said No
Kim Kardashian Stars In Hilarious House Of The Dragon Parody, The Targashians