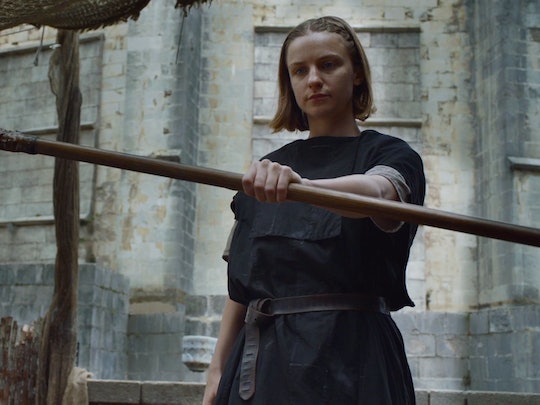 Is Waif Actually Syrio On 'Game Of Thrones'? Their Fighting Styles Are Eerily Similar

Remember way back in Season 2 of Game of Thrones, when Arya was training with Syrio in King's Landing? We got the first glimpses of the fighter she would later become and it was pretty fitting that Ned would be the one to arrange her first training session. And now, a lot of that training seems to be coming into play as Arya fights Waif in the House of Black and White. This has led fans to wonder, is Syrio Forel really Jaqen H'ghar? Or, better yet, is Syrio actually Waif on Game of Thrones? If you remember correctly — because we all know that keeping track of the names of Game of Thrones is no easy feat — Waif is currently on a constant fighting rampage with Arya. She's also someone determined to keep Arya from becoming an official Faceless Man. The reason? No one has been able to figure that out as of yet.

But, as fans have noticed, the way Waif fights with Arya is so similar to the way Syrio fought with her when he was training her in King's Landing back in Season 1 of Game of Thrones. From the way that Waif handles that fighting staff, to the way she urges Arya to get up and fight back, she is so similar to the Syrio we knew, even if it was just a short time.

If Syrio is a Faceless Man, it would kind of make a lot of sense, and if it turns out to be true that Waif is Syrio, I wouldn't be surprised.

They Fight The Same Way

This has got to be the biggest argument that Waif is Syrio on Game of Thrones. The way we see her handle those wooden staffs is exactly like Syrio did when he was training with Arya. Of course it can be argued that their fighting styles are similar because somewhere along the line, they were trained to fight the same way. But if that's the case, then at the very least, Syrio has some connection to Waif or the Faceless Men.

In Season 1 of Game of Thrones, Arya escapes the dance room while Syrio is in the midst of fighting with the kingsguard. When Arya runs away, we see her in a corridor and hear the clanking of swords and grunts and screams, but if you pay attention, it's clear that the cries of agony didn't necessarily come from the direction she'd just fled from. Which leads one to believe that Syrio didn't die, but probably slipped away in time after injuring Ser Meryn Trant enough to get away. It should also be noted that the person from Arya's hit list that she's able to kill in Braavos ends up being none other than Meryn.

It's no secret that Waif has had in it for Arya for, like, ever, so it's also no surprise that she doesn't want the Stark girl joining their exclusive club anytime soon. Waif fights with Arya any chance she gets and has even told Jaqen that Arya isn't ready. Syrio knows Arya's importance as a member of the Stark family and as they had a sort of special relationship back in King's Landing, he obviously wouldn't want her to give up her identity and life as Arya Stark.

Syrio Is Also From Braavos

This might be reaching for a tin foil theory, so grab your hat and bear with us here. But it is mentioned more than once that Syrio is from Braavos, much like the Faceless Men. Sure, there are other residents of the city than the Faceless Men, but between his fighting skills and the fact that his home city is mentioned multiple times shows us that we're supposed to remember and care about where Syrio is from.

He Has Similar Knowledge To Impart

In one of their lessons in Season 1, Syrio tells Arya, "There is only one god, and his name is death." And then, in Season 5 of Game of Thrones, Jaqen tells Arya, "There is only one god — a girl knows his name." True, it isn't the exact same quote, but nothing in Game of Thrones happens by accident or just because. There has got to be a reason for the similarities between Syrio and the Faceless Men in general. Whether he is Jaqen or Waif, Syrio's death was never seen or confidently confirmed. Not today, god of death, not today.