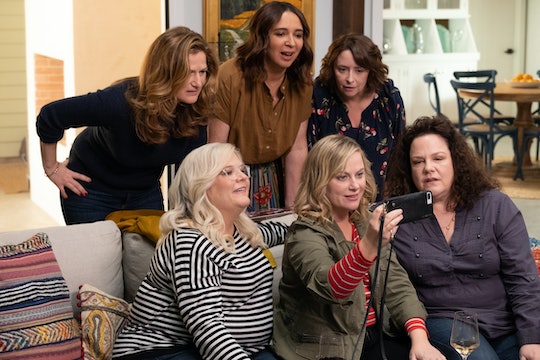 Any time that Amy Poehler and Tina Fey get together, you know there is going to be comedic gold. Throw in their former Saturday Night Live co-stars Maya Rudolph and Rachel Dratch, along with some other hilarious actresses, and you have Netflix's Wine Country, about a group of friends who travel to Napa Valley to celebrate a 50th birthday. But what ensues is plenty of hi-jinks, going off a carefully planned itinerary, and a heartfelt plot that makes you wonder if Wine Country is based on a true story.

Poehler's directorial debut doesn't follow one particular story from start to finish but, she told Vanity Fair, it is based off her many trips to wine country with her pals who star alongside her in the movie. They even took a trip for Dratch's 50th birthday in real life. So while there doesn't seem to be any real footage thrown in there to really satisfy your sweet tooth for everything from these hilarious actresses, it paints a picture of what the real life trips were like together.

Wine Country seems like a coming of age movie for women who might already be "of age" but still have plenty of questions about their lives and their futures. It's a new cross between Bridesmaids and The Hangover that has aged like a fine wine. Pun totally intended.

SNL alum writers Emily Spivey and Liz Cackowski penned the screenplay and Poehler's company, Paper Kite, filmed it. From there, they created this movie that combines everything fans love about these comedians.

In Poehler's interview with Vanity Fair, she said that her goal was to make a movie that focused on friendship between women rather than a competition, which is something you see between women in both movies and TV shows all too often.

"There’s just not enough films that take full advantage of what it’s like to be our age and to be around women that have known you for a really long time but aren’t competing for the same job or the same guy," Poehler explained.

Poehler pointed out that when you see a male version of a midlife crisis onscreen you commonly see flashy cars, a younger woman with whom he has a fling, and a wild weekend. In this case, Wine Country isn't necessarily about this group of women's own midlife crises, but it is an awakening for them as they start a new chapter of their lives. And since Poehler and these women have gone through so much together in real life, it was probably that much easier to translate their friendship to the screen.

Poehler added that there are women she knows in real life who are "incredibly interesting, funny, [and] accomplished" and that they have engaging stories that aren't about losing a husband or being cheated on. Wine Country helps show some of these real personalities while also reuniting everyone’s favorite female SNL alums on-screen.

Dratch told The Hollywood Reporter that although Wine Country, which drops on Netflix on May 10, is inspired by more than one trip the friends took to actual wine country over the years, her own 50th birthday trip did directly influence their collective decision to make the movie with the same people who went on that trip a few years ago.

For anyone who has ever taken a girls’ trip and talked about how memorable it was, this is obviously the movie for you. Maybe we can't all go on to make movies about our trips with our closest friends, but this definitely seems like a trip we have all taken at some point, even if the details are a little different.