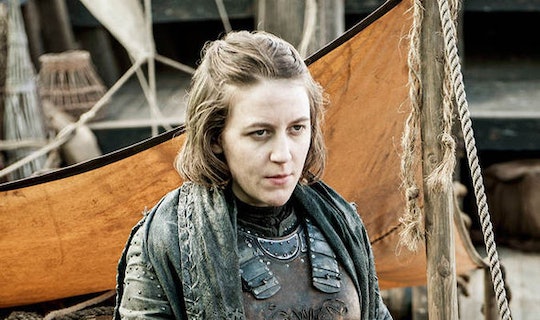 Is Yara Greyjoy A Lesbian In The 'Game Of Thrones' Books? The Series Is Different

Among the stellar moments in Sunday's episode of Game of Thrones, one of the key scenes that actually made Game of Thrones history was the coming out, of sorts, of Yara Greyjoy. Until now, we've seen no lesbian main characters on the show, short of some of the women who worked at Littlefinger's brothel in Flea Bottom. After seeing Yara get very much into a woman at one of the ports, it had fans asking, is Yara Greyjoy a lesbian in the books as well? Clearly, the Game of Thrones Yara is all about female companionship and enjoying the fruits of her labor on the way to meeting with Daenerys, but is that true to the books?

But in the books, Yara Greyjoy (a.k.a., Asha Greyjoy) isn't a lesbian, or even interested in women at all. Like the Sand Snakes and killing off Stannis Baratheon, having Yara Greyjoy as a lesbian is just another liberty HBO took with Game of Thrones. On George R. R. Martin's blog, there were fan questions as to whether or not he wrote Asha/Yara to be a lesbian in the books, but her sexual orientation in the show is news to him:

"I have a number of lesbian and bisexual women in the novels (and a couple who experiment), but Asha is not one of them. Unless I am forgetting something..."

Martin isn't wrong, nor is he forgetting something. Fans have seen queer characters on the show, but, as he suggests, Yara (or Asha) was not one of them. But, there's no reason the show can't go off book for this plot line, especially because it was great to see the diversity on the show only expand.

Knowing that Yara Greyjoy is a lesbian on Game of Thrones and not in the books doesn't really take any of the awesomeness from it. She is the series' first lesbian character, and an important and main one at that. But when they introduced her first scene with a woman, it wasn't a gratuitous scene of lesbian action. It was a powerful leader doing what all of the other powerful male leaders of Game of Thrones get to do. In fact, the scene was more about how awful it is to see Theon react to such a setting in general as a castrated man, rather than witness Yara Greyjoy getting it on with another woman.

In the books, Yara is actually eventually married off by her Uncle Euron to some man she'd never before met, but given the events in Game of Thrones right now, it seems as though she'll be too busy sailing to build a Targaryen alliance to let anything like that happen. Yara Greyjoy may not be a lesbian in the books, but Game of Thrones fans are plenty used to book/show changes by now that it's not hard to sometimes treat them as two different entities.

Regardless, finding out that Yara Greyjoy is a lesbian on Game of Thrones is the perfect next step in showcasing the strong females currently running things on the show.

More Like This
Exclusive Eureka! Clip Introduces Star Of Disney’s New STEAM Preschool Series
Yellowstone Season 5 Officially Has A Premiere Date
Meghan Markle Calls On Men "To Be Vocal" In The Aftermath Of Roe v. Wade Ending
Sea Monsters, Pandas & Everything Else Coming To Netflix In July 2022 For Families