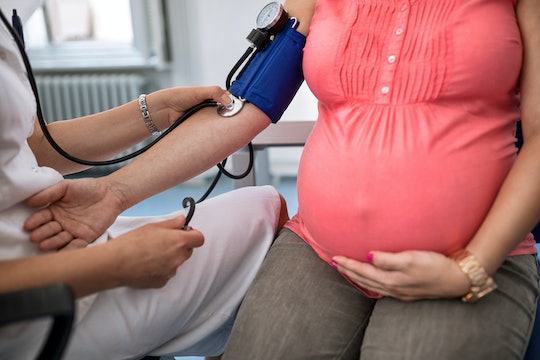 There are many factors that make a pregnancy “high-risk," including high blood pressure and preeclampsia. And unfortunately, if you’ve had preeclampsia with a previous pregnancy, you know just how much it blows. You also have probably been told that you're at a higher risk of getting it again. But is your pregnancy high-risk if you had preeclampsia before? The extra appointments, poking, and prodding aren't fun — but you might have to endure them again.

Dr. Sherry Ross, OB-GYN and women’s health expert at Providence Saint John’s Health Center in Santa Monica, California, says in an email interview with Romper that if you had preeclampsia with your first pregnancy, then yes, your subsequent pregnancies will be considered high-risk pregnancies. "A past history of preeclampsia means your body is prone to this complication reoccurring. Your doctor will want to keep a close watch on your blood pressures, protein in the urine, and other signs and symptoms of preeclampsia developing again during the third trimester," she says.

What does this mean for your prenatal visits? How will your doctor be keeping a close watch on you? "If the doctor knows you have an increased risk of developing preeclampsia in future pregnancies, she may want to see you more frequently and have you take your blood pressures at home during the third trimester. If there are subtle signs and symptoms of preeclampsia, blood work and a 24-hour urine collection to check for protein may be performed," Ross says. "During labor and delivery, the same close follow-up will be given to ensure blood pressures, blood work, and other vitals are stable throughout the laboring and postpartum period."

Haven't had preeclampsia yet, but want to try to do everything possible to help ensure you don't get it? According to the American Pregnancy Association (APA), preeclampsia will affect between 5 and 8 percent of pregnancies, but there's not exactly a lot you can do to prevent your pregnancy from being apart of that statistic. Ross says, “It’s hard to prevent an illness when we don’t understand the cause. No one is really sure why some women develop preeclampsia, but we can say who is at risk.”

Women at risk for developing preeclampsia include those who have a history of chronic hypertension (high blood pressure), kidney disease, or both. It also includes those who are pregnant for the first time in their teens or those who are over 40 years old. If you're carrying multiples, obese, have certain medical conditions such as diabetes, thrombophilia, or lupus, that can affect your chances, too and if you've had in vitro fertilization (IVF), Ross notes that you're also at a higher risk of developing preeclampsia. Obviously if you've had it before, there's a high chance you'll get preeclampsia again, but genetics also matter, so if preeclampsia runs in your family, your risk increases.

But there is good news. According to Ross, knowing who is at risk for preeclampsia can help prevent you from getting this serious disease "if you have any uncontrolled medical problems such as chronic hypertension or diabetes." She also notes that if you maintain good control of these types of illnesses, "you will decrease your chance of getting preeclampsia."

If you’ve had preeclampsia in the past, your healthcare providers will definitely work with you to ensure you’re monitored more closely since your new pregnancy will be considered high-risk. Staying ahead of the game and being diligent in managing chronic conditions before, during, and after your pregnancy can help prevent preeclampsia from happening again. Just remember, having a high-risk pregnancy isn’t the end of the world. You’ll just get a little extra love and attention from your healthcare providers throughout those 40+ weeks.