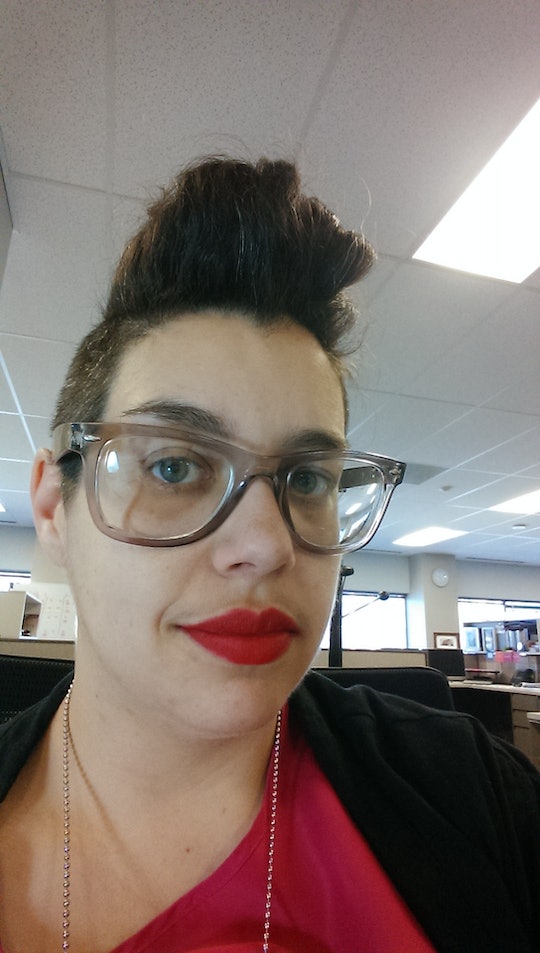 My sex drive has always been low. When I had sex, I enjoyed it, but no matter how good the sex was, I didn't particularly crave it or miss it when it was gone. I was always curious about sex, but in a detached and scientific way. I remember waiting for the desire to kick in, but it never really did. It took me until I was 28 to realize that I didn't just have a low sex drive — I was asexual.

When I got together with my partner Jon, we had good, heart-racing, sweaty-all-over sex, but my sex drive and his were always mismatched. When I got pregnant, my already low sex drive plummeted. I got overstimulated incredibly easily, and everything was uncomfortable. I was tired all the time. The last thing I wanted to do was have sex. I think Jon and I had sex maybe twice the entire time I was pregnant.

Although he was never anything but understanding and sympathetic, Jon was miserable about the sex drought. But I wasn't. In fact, I felt liberated. Not having sex for 9 months was eye-opening for me. I realized I didn’t miss it at all. In fact, it was a relief to have sex off the table: it was one less thing to think about, one less thing to manage about our relationship. It was still me and Jon, just with that one chunk of our relationship excised.

After I had my kid Arthur and my body healed, I felt the unspoken question looming. When is the drought going to end? When will I be expected to have sex? I felt the days where I had a plausible excuse to extend the drought ticking down, and Jon’s desire to start having sex again lurked around me like a fog. Sometimes he would make an overture, and usually, I would say no. I was tired, and I was also dealing with a postpartum anxiety disorder, so I was emotionally exhausted. Every now and then, we would have sex, but I still didn't particularly want to.

I always felt guilty that I didn't want to have sex with Jon. After all, I was his outlet for sex, right? If relationships are about compromise, then this was mine. I enjoyed having sex with him, and I consented to it, but at the end of the day it was for him, not for me.

We talked about this over the years. It was puzzling to him — why, when I clearly enjoyed sex, did I want it so infrequently? Did it mean I wasn’t really attracted to him? I'd tell him that I was, but it just never occurred to me to want to have sex. Once I told him that sex was great, but really, when it came down to it, wouldn’t he rather sleep? He looked at me like I’d suggested we eat flies for dinner. We were not on the same wavelength.

I consider myself a feminist, and Jon does, too. Still, the expectation that in a relationship, women have sex with their partners even when they only sort of feel like it was always present. There's a prevailing belief that if a woman has sex with someone once, they're basically consenting to have sex with that person at any future time. Even though we know intellectually this isn’t true, the pressure to consent is still there nonetheless.

I hesitated to tell Jon that I was asexual. I was afraid that he would say, “Hey, you were cool with us having sex before. If you were cool with having sex with me as an ace person before, why not now?” But the truth was that I just didn’t feel like having sex most of the time. I did it mostly because I felt guilty when I wasn’t doing it. I felt like I owed him my body. I felt like I owed him sexual satisfaction. And I was coming to realize that those thoughts and feelings were driven by rape culture. I didn’t want to participate in that.

My experience of sexuality is not universal. Asexuality exist on a spectrum, along with aromantic identities. When I say I am queer and asexual, that is not a paradox, and asexual people are also more than capable of wanting romantic relationships with other people. But it is also true that there are ace people who are strictly ace, that do not qualify it the way I do. We contain multitudes. Some of us enjoy sex; some of us don’t. Some of us, like me, have multiple partners. Some of us are quite happily alone.

As I researched asexuality, it became clear that there are many ways to be asexual. I had not rendered myself inadmissable to the asexual club because I had ever had sex, because I was queer, or even because I’d had a kid. It felt good to have a label. Seeing myself as asexual was freeing because for the first time, I had a schema for myself that didn’t say I was broken or a bad partner.

When I finally did tell Jon I was asexual, he handled the conversation beautifully. He hugged me, and he said it made sense. He said it didn’t really surprise him when he thought about it. And he said we could change whatever aspects of our relationship that I wanted to, in whatever ways I wanted to. We could keep having sex, or not. I cried with relief.

My relationship with Jon is as strong as it’s ever been. In some ways, it's even stronger, because I’m happier now than I’ve ever been. We’ve made our relationship work for us, and we've figured out a way to make sure both of us get what we need. For us, non-monogamy solves the issue of our mismatched sex drives. Jon has a lovely girlfriend. Jon and I have a standing date night. Mostly we watch TV or play music or play board games.

Being asexual does not mean I’m broken. It doesn’t mean I’m unlovable. It doesn’t mean I can’t love other people. It just means that sex is less interesting to me than it is to other people. I’m lucky that my asexuality has had little impact on my relationship to Jon in the long run. I wish that it hadn’t taken me so long to figure this part of myself out, but more than that, I wish we didn’t live in a culture that still teaches women and girls that their bodies belong to their partners. Otherwise, I probably would've come out to myself and everyone else much sooner.