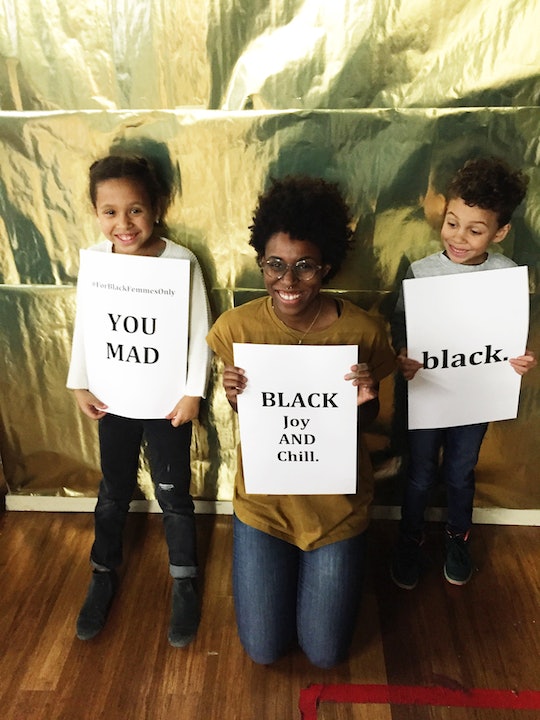 There are moments when I'm at the playground with my children and our friends when I have to remind my children not to pretend to be playing with guns, while the white mother beside me lets her children carry on playing. This happened last summer, when we went to a park with some school friends. Naturally, the little boys started playing bad guys vs. good guys.

It didn't always feel like this. Playgrounds used to feel like a safe place to go with my children. But it doesn't feel this way anymore, not since Tamir Rice was murdered while playing in a playground last year.

It's not just his death that has somehow created a divide between myself and my white peers, particularly white mothers. It's every single murder of a person of color that has sparked outrage. It's the Black Lives Matter movement, not to mention its subsequent backlash. It's a whole new generation realizing that old-fashioned institutionalized racism in America was actually still here. We had just been (incorrectly) taught that hate could no longer hurt us.

I grew up in a predominantly white suburb right outside of Los Angeles. I was always the one black child in all of my activities, from Girl Scouts to swim team to gymnastics. My reality mirrored what I saw in the media. When I was a tween, my favorite movie was Clueless and my favorite TV show was Lizzie McGuire, in which white girls played the main roles and people of color only played supporting characters. My parents would tell me that this perception wasn't accurate, but it was hard to believe that when my world was so starkly pale and white.

The only time I saw people who looked like me outside of my family was when we would venture into the city, where I would see people of all cultures and races existing together. Visiting these places was one of the few times that I felt comfortable in my dark brown skin. But it wasn't enough to give me an idea of what it meant to be black in America.

While I was pregnant with my first child, I realized that someday, she might experience some form of racism based on what she looked like.

By the time I began to gain an understanding of what it meant to exist as a black person in a country that tries to hide its true feelings about racism, I was becoming a mother. While I was pregnant with my first child, I realized that someday, she might experience some form of racism based on what she looked like. The year was 2008, when America elected President Obama. While part of the country was overjoyed by the prospect of a black man taking office, others openly and shamelessly flaunted their racism, telling him to "go back to Kenya."

It was then that I realized that not only had I myself experienced racism, but it was so deeply embedded in the makeup of my country that I barely noticed it was there in the first place. I remembered when white parents told little white kids they were beautiful, then told me my hair looked "unruly" because it wasn't perfectly straight. I remembered when kids would say the the n-word around me, then would look at me and say, "It's OK, because you're our friend." I remembered that my 6'4'', 200-pound father would always enter a space smiling, because he wanted to make the white people in the room feel safer.

As I began to educate myself on race relations in our country, these memories started flooding back. Suddenly, I could see them for what they were.

It took a while for me to become comfortable talking about race. Growing up, it was perfectly normal to talk about being black, but I learned quickly that it wasn't a comfortable topic for other people. Yet now that I raise children who have a black person as their mother and a white man as their father, we have many conversations about race in our home.

We talk about skin color. We talk about how different our shades are. When my kids were 3 and 4, they would fight over who was going to be as dark as me fastest, which made me cry because I'd never experienced anyone wanting to have the skin that I had. Talking about race in my home is the same as talking about cleaning your room, or doing the dishes. For this reason, it makes me more comfortable having these conversations outside of my house.

Parents seem uncomfortable when I bring up race. They say they aren't ready for their children to talk about the experiences of black people in America.

I expected many of my white parent friends to be open to hearing what I had to say about my experience as a black mother raising brown, black-identifying children. But that hasn't been the case. Parents seem uncomfortable when I bring up race. They say they aren't ready for their children to talk about the experiences of black people in America. On a field trip with my son's kindergarten class, I asked if the teachers would be doing anything for Black History Month, to which a few parents said, "We don't want our children learning about race just yet!" Their reasoning is that they don't want to rob their children of their childhood by teaching them about, say, the horrors of slavery, or segregation .

Unlike these white mothers, I am forced to have many conversations with my 6- and 8- year old about the realities of being black in America. I too, do not want to rob them of their childhoods. But I also need them to live, so I equip them with the tools they need to survive, which means that I tell them the truth.

I am not going to accept the silence of my white peers, simply because they are uncomfortable talking about race.

As my children get older, I've noticed that I've taken many steps back from relationships I've had with white mothers, because they tend to downplay the panic and fear I have for the safety of my children. There is nothing more alienating then having someone you trust and love, tell you that your experiences are not founded in anything concrete. That the fear you have is simply paranoia.

Recently, I posted on Instagram about how white culture was harmful, that we needed to talk about it more often. A friend texted me saying that I was too hard on white people, and that I needed to be kinder. She pointed out that my ex-husband was white, and that my current partner is white as well. I reminded her that it wasn't even white people I was angry at, but at white culture, which has built an atmosphere of silence around issues of race.

I am not going to accept the silence of my white peers, simply because they are uncomfortable talking about race. I still struggle to share these feelings with the white mothers around me, because they brush me off and belittle what I try to express. It makes me feel insignificant and terribly small. And when you're fighting for not only your life, but your children's lives as well, that is truly a devastating feeling.