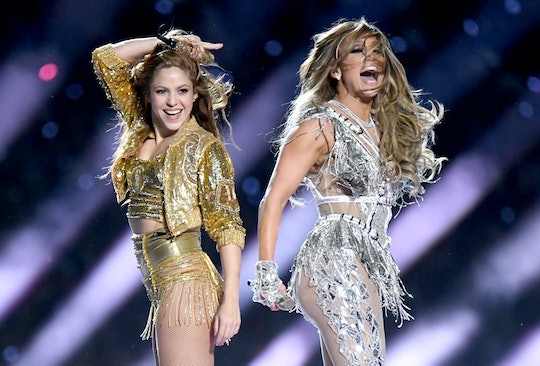 Crotch shots. Stripper poles. Sheer clothing. The Super Bowl half-time show performance by Jennifer Lopez and Shakira, two singular Latina powerhouses, was undeniably awesome, but much of the internet has been fixated more on these things than anything else. And to be completely honest, I shared in some of that reaction. Not because I'm a white, pearl-clutching boomer, or because I'm anti-sex. In fact, I'm a fairly sex-positive individual who once worked as an editor of pornography magazines. But after sitting with my emotions for a while, I realized that my current conflicted feelings—pride at seeing strong Latinas on such a major platform when negative sentiment against our community feels extremely high, and discomfort at viewing and discomfort at their hyper-sexualization—is more tied to how I and many other young Latinas were raised than anything else.

According to the Pew Research Center, 84% of Latin American adults say they were raised Catholic. As the daughter of immigrants from Nicaragua and Mexico, I was also raised in this religion, which venerated the Virgin Mary. Similar to the Madonna-Whore complex, we have in our culture this idea of marianismo — which is to say, a desire to be like the Virgin Mary.

Many women in our culture find themselves striving for purity and goodness, to give everything they can for their children and families, all in the name of la virgencita. We also raise young girls to be “pure,” to “save themselves” for their husbands (because heteronormativity is also strong), to dress and act modestly, and well, you get the point. Conversely, boys are given a lot more freedom over their lives. They’re encouraged to work hard, be dominant, and if they have sex out of wedlock? Well, as long as they do their best not to get someone pregnant, it’s just not as big a deal.

Many of us grew up hearing our own mamis complain about provocatively dressed women — especially when women reached a certain age, or got married, or had children.

Growing up, my mother was very modest and conservative, and always gave (and gave up) everything she could for the benefit of our family. She continues to be this way, and while it’s something that works for her, it honestly always made me terrified of becoming a parent. I never understood why, in order to “be respected” or be a “good” woman or mother, I needed to follow certain rules. You know who definitely doesn’t follow these rules? J. Lo and Shakira.

There have been a lot of pearl-clutching reactions to whether these Latina moms went “too far” in their performances at the Super Bowl. No doubt, I blushed a few times while watching the half-time show myself. Perhaps that’s in part because I’m a queer woman and find these women to be ridiculously attractive on top of also acknowledging their strength, power, and talent. More to the point, though, I feel it reminded me of how surprising it still is to me to see women of a certain age, Latina women of a certain age, Latina mothers of a certain age, dressing and moving in ways I could only dream of ever doing myself.

Because here’s the thing: Shakira and Jennifer Lopez both owned the heck out of that stage. They walked out with confidence and grace, knowing full well that some people would be shocked, others turned on, some angered, and many others incredibly inspired by their performances. They did this while also calling attention to important issues facing our community today, like the lack of support the rest of the U.S. has had for Puerto Rico, and the horrifying reality that we are continuing to separate and traumatize families at the border, and keeping children in cages. They did this while playing instruments and dancing and singing and not apologizing for their existence. That is a lot for anyone to do, and they did it in heels and costume changes.

Us younger Latina moms can take a page out of Shakira’s and J. Lo’s book and remember that we actually don’t have to go full virgencita just because we’ve had some babies.

I appreciated the political messages of the performance, but on a personal level, I also loved the hell out of seeing two Latina moms literally “do it all.” As Latinas, many of us grew up hearing our own mamis complain about provocatively dressed women — especially when women reached a certain age, or got married, or had children. Even while watching the performance, I could just imagine my mother and other, older Latina moms bad-mouthing these women, or telling their daughters and grand-daughters not to watch. There was certainly a lot of this among conservative (and potentially racist) white women as well, but slut-shaming and sex-negativity within the Latinx community is also quite real. While there are plenty of Latinx folks whose families don’t buy into such nonsense anymore, there are still plenty who do.

But at 43 and 50 respectively, us younger Latina moms can take a page out of Shakira’s and J. Lo’s book and remember that we actually don’t have to go full virgencita just because we’ve had some babies. We don’t have to shy away from anyone’s gaze, and dressing or acting or performing in a way that is sexual doesn’t demean us or give anyone permission to disrespect us. Perhaps our madrecitas, lovely as they are, bought into the notion that motherhood requires some kind of return to the shadows. But I, for one, am with J. Lo and Shakira. Yes, I am a 30-something-year-old woman, a Latina, and a mother, but that doesn’t mean I am no longer capable of being athletic, strong, sexy, empowered, intelligent, political, or provocative. I plan to not only contain multitudes, but to show them off — and hopefully with some sparkles.

More Like This
Ginger Zee Had A Perfect Response After A Troll Asked Her "Who's Raising Your Kids?"
It's A Beautiful Day In Jenny Slate’s Neighborhood
Chris Evans Has Choice Words For Critics Of The Same-Sex Kiss In 'Lightyear'
35 Relatable Quotes That Prove Being A Mom Isn’t Easy