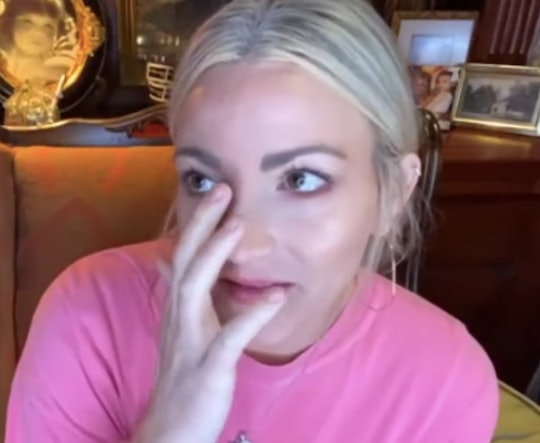 It's been roughly three years since Jamie Lynn Spears' daughter Maddie's scary ATV accident and, understandably, speaking about the experience is emotional for the mom of two. In a new interview with Maria Menounos on her podcast Better Together with Maria Menounos, 29-year-old Spears teared up while about talking about the accident that left her daughter hospitalized in 2017 and shared how it's impacted her as a mom.

While chatting with Menounos this week, Spears explained that her then 8-year-old daughter was driving an ATV at her in-laws house with "every safety measure that could be taken," but she "somehow or another, drove into the water" that was on the property. Spears said that she and her husband, Jamie Watson, dove into the water to save Maddie, but were unable to rescue her. When first responders were finally able to get her out of the water, Spears said that she thought she had lost her daughter. According to Spears, Maddie "wasn't responding to anything".

"That moment, I felt everything you could feel, I think, as far as the worst," Spears told Menounos, tearing up. "There's nothing worse than looking at your child and thinking that you've failed her. And I didn't want her to think that I couldn't save her."

Maddie was airlifted to the intensive care unit at a nearby hospital after a firefighter was able to feel her pulse. Once at the hospital, she was still unresponsive and things "weren't looking good." However, Spears said that after a priest came to read Maddie her last rites, her daughter became responsive. "That was our first sign she was there," she said.

"Everything changed," Spears said. "I've faced my worst fear now. What else can I mess up or do wrong that will be as horrible as that? Nothing. There's nothing. God gave me the blessing of giving me my daughter back. I lost her and I got her back."

Maddie was fortunately able to make a 100% recovery with no lasting damage, according to Spears. Now, three years later, Maddie is an 11-year-old girl who loves playing softball and being a big sibling to her 2-year-old little sister, Ivey Jane.

Spears told Menounos that Maddie's accident has given their family a new sense of purpose. "I don't care what people think about my decisions as far as my family goes," she said, "because I know what's right and I've got a little reminder, every single day — even when she's being mean to me."