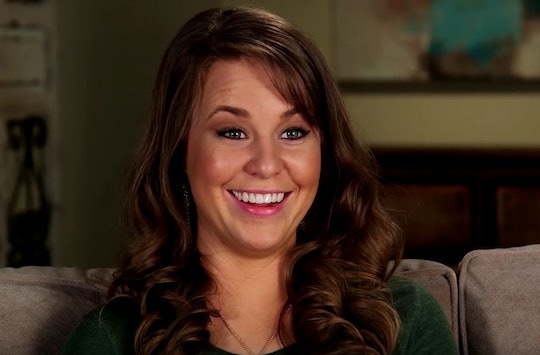 When you're part of the Duggar family, it's almost impossible for you to be lonely — and Jana Duggar knows this to be true. For starters, the oldest daughter of the Duggar family has a twin brother and, of course, she's always had pals around her at home. But Jana has a new twin: her sister-in-law, Abbie. Really, Jana Duggar's new Instagram photo with Abbie is such a sweet "twinning" moment that highlights how close the Duggar women are.

Jana and her twin brother, John-David, were born on Jan. 12, 1990, according to E! News, and they two have been close since from day one. And when John-David married the love of his life, Abbie Grace, in November 2018, Jana was of course by his side on his special day. And unsurprisingly, Jana has gotten on well with John-David's other half, Abbie.

Jana took to Instagram earlier this week to share the sweetest photo of herself and Abbie from her family's recent trip to Los Angeles, California, to visit her sister, Jinger, according to OK! Magazine. In the photo, Jana and Abbie can be seen standing in the middle of a road wearing matching blue denim skirts and black shirts. "Twinning," Jana captioned the photo.

While the girls might look twins in their matching outfits, there's one very big difference between them. As Counting On fans might recall, Abbie is currently pregnant and due in January, which is around the same time as John and Jana's birthday, so it'll be an especially exciting time for the Duggar family.

In August, Abbie and John announced that they are having a girl, according to People. On the same day, they made that announcement, Jana shared photos from their sex reveal party wrote the sweetest post about her twin and his wife on Instagram. "I couldn't have asked for a better twin to go through life with than John, and their little girl is so blessed already that she got an amazing guy for her daddy!!," she wrote. "And seeing what a tender caretaker Abbie has been for her family and in her job as a nurse, I know she is going to be an amazing mother!! Love y'all so much!!"

Needless to say, Jana is so excited to become an aunt and watch her brother become a father. "I am so excited for you and Abbie in this new season of life and I pray this new year will be the best one yet!," Jana wrote to her brother in an Instagram post earlier this year. "I love you dearly and am so proud to call you my brother and best friend!"

Jana has plenty of experience in being an aunt to her many nieces and nephews, and has always taken care of her many younger siblings. So if John and Abbie ever need a babysitter, they know who to call. And from the sounds of it, Jana would be more than willing to help them out with their baby girl. Who knows, maybe they'll have a sweet "twinning" moment themselves one day.