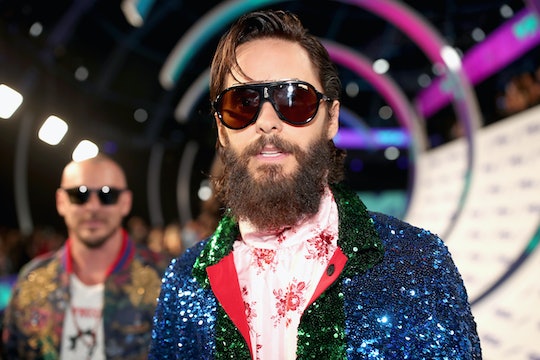 On Sunday, the VMAs were a dazzling, interstellar-themed off the walls celebration of music, but it was impossible to let the night go by without acknowledging recent losses within the music industry. Jared Leto's tribute to Chester Bennington was so full of love, and it showed. Linkin Park frontman Bennington died by suicide on July 20, on what would have been fellow rocker Chris Cornell's 53rd birthday. Cornell also died by suicide in May. The loss was felt throughout the industry: Not only were Bennington and Cornell close friends, Leto had toured with them both as lead singer for 30 Seconds to Mars.

Following Bennington's death, Leto wrote a moving tribute on social media, praising his "absolutely unforgettable voice." At the VMAs, Leto gave a tribute to both Bennington and Cornell, noting their exceptionally close ties as Bennington performed "Hallelujah" at Cornell's funeral in May. "Chester was my friend, as he was to so many," Leto said on Sunday. He continued:

Witnessing his life taught me important things. Especially about working relentlessly, pursuing dreams, and being kind and caring while doing it. When I think about him, Chester, I see his face, which was always smiling. I think about his heart, which he wore on his sleeve.

Leto also mentioned Bennington's wife and six children in his tribute. Perhaps one of the most inspiring aspects of Leto's tribute to his friend is that it truly felt like a celebration of Bennington's life. Leto encouraged anyone watching that if they felt like they were lost or without hope that they were not alone, and to look to Bennington's life as an inspiration while he was alive rather than to focus on his death. "You are not alone. There is always a way forward. Reach out, share your thoughts, do not give up," Leto said into the camera.

Leto then encouraged everyone in attendance at the VMAs and those watching at home to get on their feet in celebration and tribute to Bennington. The lukewarm response from the audience prompted Leto to say "I've got all day," before he introduced a video of a Linkin Park performance from the 2010 VMAs. Oddly, it appears the video performance tribute to Bennington was cut short and went to commercial — and people were pissed.

You can watch Leto's full tribute to Bennington below — and even despite his hopeful tone, you definitely will want to have your tissues on hand.

RIP, Chester Bennington. You are clearly loved and deeply missed by many.