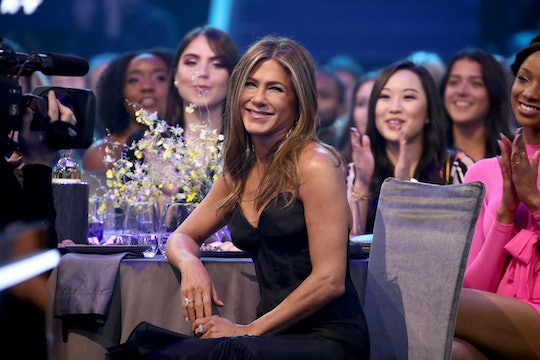 Call it "The One with the Enchiladas." Jennifer Aniston and Thanksgiving go hand-in-hand for millions of Friends fans: The long-running sitcom aired so many iconic episodes devoted to Turkey Day (Monica dancing with a turkey on her head, anyone?). So it's only fitting that the actress would find a way to make the holiday funny in real life, too. This year, Jennifer Aniston's Thanksgiving included enchiladas, Jimmy Kimmel, and hanging out with an ex (cue the Friends theme music).

The ex in question was Aniston's former husband, Justin Theroux, although their celebration seemed blessedly free of the kind of awkwardness most people feel when they spend a holiday with an ex. Maybe that's because technically, this was a Friendsgiving celebration (held the night before Thanksgiving), and the couple had plenty of mutual pals around adding to the chill vibes: Courtney Cox, Jason Batemen, Will Arnett and Jimmy Kimmel were all hanging out, as evidenced by a group selfie shared on Theroux's Instagram story:

Meanwhile over on Jennifer Aniston's (fairly new) Instagram, the actress was showing off her culinary contribution to the gathering... enchiladas. Why enchiladas? Apparently, as People reported, it all started during an episode of Jimmy Kimmel Live! from December 2018 in which Kimmel and Aniston discussed his issues with her Friendsgiving celebration that year.

“My problem with this holiday," Kimmel said, "is on Thanksgiving I cook a lot of stuff — the normal turkey, yams or sweet potatoes, the whole deal — but at your event we had all of those things. So then I’m making the same thing everyone had the night before, again. So in essence, you turned my meal into leftovers.”

As a solution, Kimmel suggested that Aniston serve something different, finally deciding on Mexican food as the most suitable replacement. Aniston didn't forget, as her Instagram post from Wednesday night showed, and she didn't disappoint, either, but she did manage to serve up a little sass with Kimmel's special dish. She posted a pic of herself putting a pan of enchiladas in the oven with the following caption:

Kimmel was thrilled, of course. “Finally, someone listened to me!” he said in a clip, also posted to Instagram. And if you're wondering whether or not Aniston suffered an "English trifle" moment while preparing the entree, it seems like this recipe was followed without a hitch.

“I will say Jen… I loved that f*%king enchilada," commented Courteney Cox.

If only Joey were around, he probably would've eaten the whole pan.