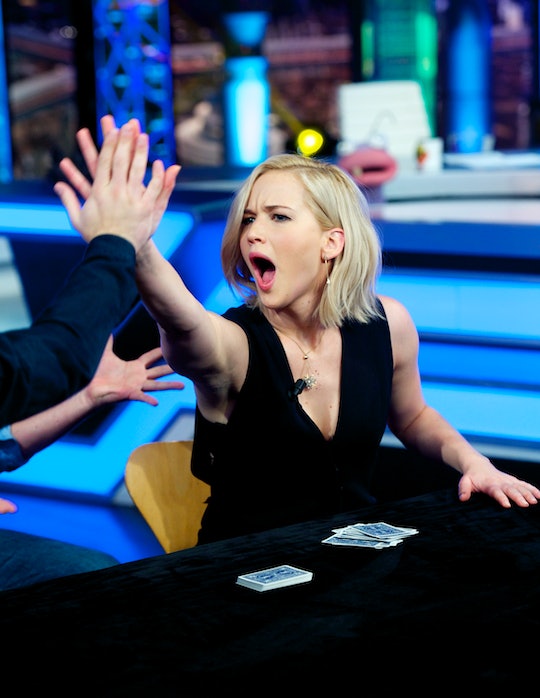 Jennifer Lawrence & Amy Schumer Are Nominated For Golden Globes In The Same Category, & Here's What We Hope Doesn't Happen

Remember that one time when Amy Schumer and Jennifer Lawrence made all of our BFF fantasies come true by riding a freaking jet ski together? Yeah, so do I. It's sort of one of those glorious images that have stayed burned into my memory. But with Hollywood BFF status comes the inevitable (probably made-up) competition when it comes to awards. Namely, Amy Schumer and Jennifer Lawrence were both nominated for Golden Globes — Schumer, for Trainwreck, and Lawrence for the upcoming Joy — which means it's very possible that the ensuing media coverage will attempt to pit these two famous pals against each other.

Obviously, I'd love it if this "Schumer vs. Lawrence: BFF Showdown" narrative never took root (and admittedly, I'm aware that by writing about it here, I'm possibly not helping to situation), but all the components are there: two movies starring two totally funny and super-famous women who seem to be made up of equal parts awesome, smart, and likable. So yeah, the perfect recipe for the media to chew them up and turn on them, doing everything possible to make it appear that being nominated for the same award is causing them to turn on each other.

While the origins of this friendship romance (because "bromance" doesn't really apply here and is a douchey term anyway), are unknown (the two haven't worked together before, and appear to know each other just from...ya know...being famous), all I know is that these girls make the cutest friendship couple and share the same silliness and fierceness that it would only make sense that they should be up for the same Golden Globe.

I don't know about you, but I share pretty much everything with my best friends (probably too much, actually), if we were up for the same award or prize, I would be hella excited for one of them if they were chosen over me. And I am totally confident that they'd feel the same way if things were reversed. Because, you know, that's how friends should be with each other. And something tells me these women would feel the same. I mean, you don't go and spend Thanksgiving together if your friendship isn't embarking on some real levels, right? Plus, their total comfort level around each other pretty much sums up any of my own close friendships. As in, you know, sweatpants that may or may not have stains, sometimes unwashed hair, and bras being absolutely optional.

Lawrence and Schumer may be up nominated for the same Golden Globes category in 2016, but if Amy Poehler and Tina Fey have taught us anything about female friendships in Hollywood, it's that it is entirely possible to have one without letting the media spin the friendship into some totally sexist competition.