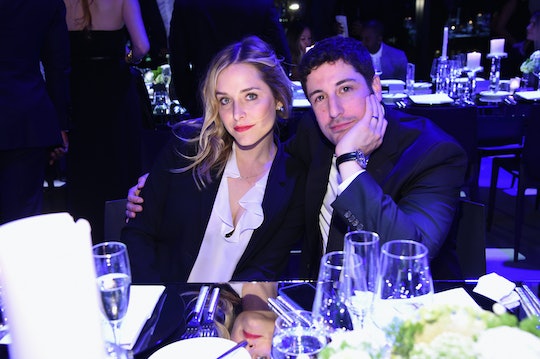 As their fans and social media followers know, Jenny Mollen and Jason Biggs are pretty transparent when it comes to the ups and downs of parenting. Although their Instagram Stories might make things seem a little hectic sometimes, the one reason their growing family works is that Jenny Mollen and Jason Biggs agree on how to keep each other happy since becoming parents. And their answer is very, very relatable.

Biggs, who most people know from his role in American Pie, and Mollen, the author of Live Fast, Die Hot, among other books, have been together for over 10 years. They have two boys — 4-year-old Sid and 5-month-old Laz, which means that they probably haven't really slept in ages. When asked by People magazine what they do to keep things hot in their marriage, they both gave the same answer.

The "sexiest" gift they can give to one another is having one person pile the kids into the stroller and leave the other alone for a few hours. In fact, there are scores of Instagram Stories on both of their pages that address just how wonderful those hours can be, whether it's Biggs hanging around the house cooking something that looks delicious or Mollen broadcasting live and direct from her bathroom, examining her non-existent wrinkles.

People reported that 38-year-old Mollen read from a card, addressed to her husband, "At this point in our marriage, the sexiest thing she can do for me is …" Biggs, 39 years old, quickly broke in and answered the question. "Oh, take the kids and leave for a couple hours."

Mollen was in total agreement, proving that they just might be the perfect couple. "Oh God, yeah. I think just leave me alone.”

Recently, Mollen and Biggs have been sharing a lot of these way-too-real parenting moments in interviews, often referring to their eldest son as the "little dictator" that rules their home. Mollen said of Sid in an interview with Hello! Magazine last year:

I think he is more me. He’s a little dictator so he’s kind of like a little power hungry control freak like me. When he gets mad, he’s very dramatic – the way that Jason is if he stubs his toe. He flails about on the floor for a half hour letting me know he’s been hurt.

This kid has a lot of personality, and personally, I get where he's coming from. During the same People event, Biggs talked about just how creepy kids can be. Biggs related a story about putting Sid to bed while he had a fever:

He had a fever last week and he was pretty delirious, and at one point he turned to me — I was trying to put him down to bed — and he was just like, "Daddy, Daddy … my memories. My memories are gone." I’m like, "You’re 4, you have two memories. I’m gonna remind you of them right now: We saw Cars 3 and your brother was born."

Afterwards, Sid was sure he saw his nanny, named Chris. According to People, Biggs explained:

But just because parenting is full of strange, frustrating moments doesn't mean that Biggs and Mollen totally cynical about the whole affair. In November, Mollen got sentimental on Instagram about the whole experience of being a mom. She wrote:

Today I took Sid into a women’s clothing store and he didn’t have a total meltdown or try to destroy the place. In fact, he actually enjoyed himself and even insisted on trying on “something in his size”. This was a major win and also bitter sweet bc it was a true indicator that he’s growing up! Every waking second, he’s evolving. We’ve come so far in just 3.5 years it’s almost unbelievable.

Although they joke that things get a little wild in their house sometimes, and that they need as many breaks as possible with two kids, Mollen and Biggs seem to have this parenting thing down at the moment. At least until Laz overthrows his big brother in a coup d'etat to become the next toddler dictator. Then both parents might just want to quietly pack up and retreat.