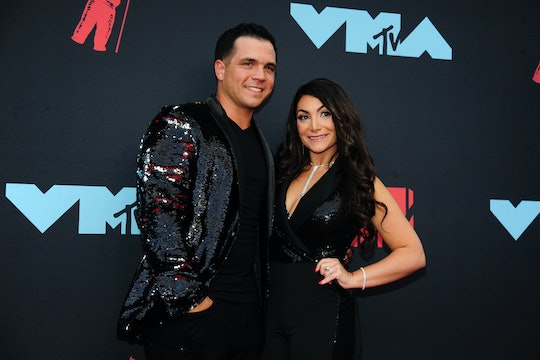 In the sweetest Halloween-themed announcement, Jersey Shore star Deena Cortese revealed she's pregnant with her second child and is "filled with so much love and joy."

The MTV reality star and her husband Chris Buckner, who are already the parents to their 1-year-old son CJ, will be expecting their newest arrival in May 2021. "Our hearts are filled with so much love and joy!," Cortese captioned the festive fall-centric photos reminiscent of her first fourth of July themed pregnancy announcement. "CJ is going to be the best big brother ever! ... sooo for everyone that was asking YES YES YES ..I’m pregnant."

The expectant parents included so many fun little details in their announcement, like the pumpkins revealing the news and their Halloween themed t-shirts offering some festive commentary. "I smell a child," Cortese's Hocus Pocus-themed shirt reads, while her husband's shirt says, "Can't scare me. My wife is pregnant."

It also seems like CJ, who was also wearing a festive shirt and Halloween-themed pants, is thrilled about his sibling on the way. "This little pumpkin is going to be a big brother due to arrive May 1, 2021," the sign in the photo reads.

Cortese's Jersey Shore cast mates quickly took to the comments of her post to congratulate the couple. "YASSSS MAWMA," Nicole "Snooki" Polizzi commented on the photo. "So excited for you!" Jenni "JWoww" Farley added, "Best news."

Anyone who follows Cortese on social media knows that she loves being a mom and has also been candid about the hardships of motherhood. "I just love being a mom," Cortese told TV Insider in July 2019. "I feel like I was born to be a mom. He is my everything. Honestly, I don't remember my life before him. He is literally my everything. I just love him so much." In that same interview, Cortese said that she and Buckner "definitely want to have more kids" and "bought a bigger house so we can eventually grow a bigger family."

While Cortese didn't share the sex of her second child, she did reveal she's due to give birth in about six months. Hopefully we'll get plenty of meatball updates in the meantime.