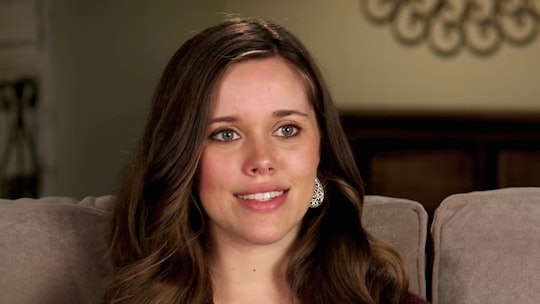 People Are Shaming Jessa Duggar (Again) For The Most Annoying Reason

Throughout the past few months, Jessa Duggar has faced a lot of criticism on social media. Commenters have chastised Duggar on everything from her "dirty" home to her boys' footwear, and the backlash has been a bit ridiculous, to say the least. Unfortunately, it looks like Jessa Duggar is getting mom-shamed once again, and the reason why is incredibly frustrating.

Out of all the Counting On stars, Duggar is the most active parent on social media. Duggar regularly shares videos and photos of her two sons, Spurgeon and Henry, and she often partakes in casual conversations with other parents. Although Duggars' parenting posts tend to be cute and harmless, many commenters critique Duggar for her so-called bad parenting choices. And as you might expect, the backlash is often based on utter nonsense and misinformation.

On Friday, Duggar enraged mom-shamers for the umpteenth million time when she shared a video of her 8-month-old son, Henry, trying a new food. The video shows an adorable Henry cautiously nibbling on what looks like a puff, and it's hilarious and sweet. Duggar said of the video, according to Instagram:

He takes after his mother. Haha! This is me trying a new food for the first time. 😂 #babysfirstfoods.

When I first saw this video, no red flags went off in my head — I saw a cute baby trying out a new snack and that's about it. It's also important to note that I'm not a parent, which means I didn't watch the video through a parenting lens.

Although I didn't immediately see any issues with the video, many fans did. Commenters assumed Duggar gave Henry popcorn, which is a food that shouldn't be given to children until age 5, according to Live Strong. A snack like popcorn "can easily become lodged in a young child’s throat or lungs," according to Nationwide Children's.

Of course, many commenters criticized Duggar for supposedly feeding her son a choking hazard:

If that is popcorn watch out. The two biggest checking hazards for babies and toddlers are popcorn and hot dogs.

Isn't he a little young for popcorn.

Babies can choke on popcorn. Why would you let him have that?

Was it popped corn? Noodle? What.

As for the icing on this mom-shaming cake, one commenter also critiqued Duggar's baby chair, because of course:

Does it make anyone else nervous the chair is ripping?

Although a lot of fans admonished Duggar for allegedly feeding Henry popcorn or some other potentially dangerous food, others took to her defense. Many commenters pointed out that Henry was likely enjoying Gerber Puffs, a snack that is safe for young children.

Take a look at some of the comments below:

It's not popcorn!! It is made specifically for babies learning to eat! Dissolves fast!

That wasn’t popcorn, it’s a puff snack made for babies

It's a puff. Kind of like a baby cereal. Dissolves quickly, so perfect for little ones!

It wasn’t a Lucky Charm, it’s a product made for babies by Gerber brand called puffs. They have veggie and fruit flavors and dissolve very easily for babies!! 😀

Duggar has yet to comment on the great puff debate of 2017, but she has defended herself against other instances of mom-shaming in the past. In fact, Duggar has had to defend her parenting choices more than once, which is pretty disappointing. One has to wonder why people are so quick to assume the worst of a parent, especially if they don't know that parent personally.

The upside is that the criticism hasn't deterred Duggar from sharing moments from her kids' lives — after the puff drama, she shared at least three more photos of her sons. It's clear Duggar isn't going to let outside criticism influence her parenting, which is a testament to her confidence as a mom.