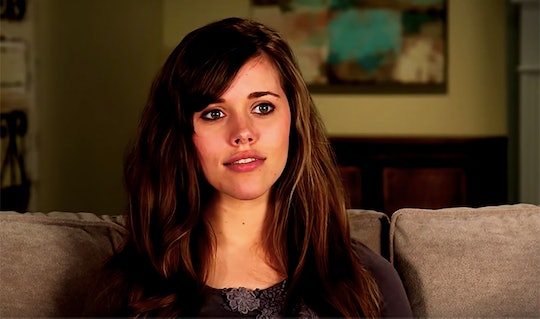 You might want to sit down for this one, Counting On fans. In an exciting turn of events, it sounds like there might be another Duggar pregnancy sooner than later because Jessa Duggar is ready to have another child, according to Us Weekly. Jessa made the big announcement on Thursday, just one week after Jinger Duggar welcomed her first daughter into the world. Although Jessa didn't dive deep into why she has "baby fever" all of a sudden, there's a good chance Jinger's newborn has something to do with it.

Now that the baby boom in Duggarland is officially over (can you believe three Duggar babies were born in 2018?), Counting On diehards are anxiously awaiting the next pregnancy announcement. Although it's not cool to pressure any of the Duggar women to get pregnant, it's understandable fans are rooting for another baby to join the mix. The Duggars make cute kids, after all, and high-profile pregnancies are always exciting.

The good news is Jessa might deliver (no pun intended) a baby announcement in the near future. "I definitely have baby fever," Jessa admitted, according to Us Weekly. The mom of Spurgeon, 2, and Henry, 1, also revealed she and her husband, Ben Seewald, would be "overjoyed" to welcome another kid into their family. "[We] would be overjoyed if we were to find out we were expecting again. It would be sweet to have a baby girl," Jessa added.

Of course, it's reasonable to assume Jessa wants a baby girl ASAP so that she and Jinger can raise their daughters together. The sisters are best friends, and it would be nice for them to see this strong bond replicated in their kids' friendship. Jinger once opened up about their deep connection in an Instagram post she wrote for Jessa's 25th birthday. Jinger penned:

Whether we were teaming up as little kids to color the kitchen cabinets with Sharpies or teaming up to help others as we got more mature—you have always been a faithful companion! We have made so many memories and enjoyed doing so many things together—just to name a few...my shopping buddy, fashion consultant, travel companion, hair stylist, playing piano duets together & bargain hunting! God is so kind to give me a sister such as you!

Aww. I think most fans would love to see Jessa and Jinger 2.0.

The only downside to this plan? Jessa isn't sure if she's ready to leave her #boymom life behind. “We’d probably feel like we were having to start again from ground zero if we had a girl thrown in the mix!” Jessa joked, according to Us Weekly. " ... it seems like we’re getting this boy thing down pat."

Until Jessa and Seewald figure out what they want next for their family, fans should probably keep the pregnancy speculation to a minimum. Jessa, like any reasonable person out there, doesn't like it when strangers ask her if she's pregnant. Case in point: Following a string of pregnancy rumors in April, Jessa took to her Instagram Stories to deliver a sarcastic message about her supposed bump. Jessa wrote alongside a photo of herself in a white t-shirt, according to In Touch Weekly. "Bc I’ve been asked if I’m hiding a bit of a bump… BIG ANNOUNCEMENT! Yes! But it’s currently a shrinking bump rather than a growing one. #postpartum #baggyshirts #thanksforasking.”

Translation: Jessa will announce her next pregnancy when she's ready. Although it's exciting to hear she's ready to expand the Seewald brood, fans still need to be respectful of her privacy, of course.

In the meantime, however, people are free to speculate about the bond Jessa and Jinger's kids will one day share. If history is any indication, the sisters' kiddos will be the best of friends.