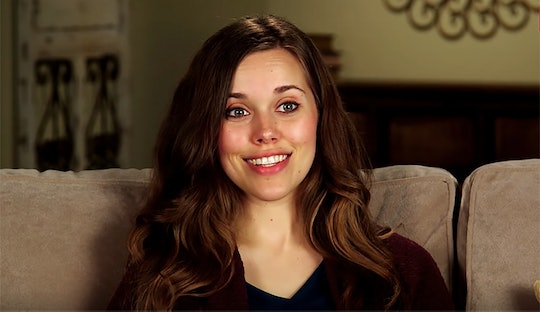 Here Is What Jessa Duggar Is Grateful To Her Parents For

Michelle and Jim Bob Duggar shared their 34th wedding anniversary on Sunday, a major milestone for any couple, let alone one with 19 kids. And in honor of the sweet accomplishment, Jessa Duggar penned an anniversary tribute to her parents that has garnered close to 80,000 likes. The message is incredibly heartfelt, and proves just how grateful Jessa is for the loving example set by her mom and dad.

The month of July has been busy for the Duggar family. Jim Bob celebrated his 53rd birthday on July 18, followed by Jinger Duggar welcoming her first daughter into the world on July 19. And to top it all off, Jim Bob and Michelle celebrated their 34th wedding on Sunday. Talk about a busy few weeks.

Considering how hectic things have been for the Duggar family, it's a surprise Jessa found time to publicly congratulate her parents on the milestone. The young mom seems to have settled into a nice rhythm raising her two sons, Spurgeon, 2, and Henry, 1.

Jessa sat down on Sunday to write her parents the most epic tribute ever, starting off with a bit about their mutual good looks. (You have to admit that Jim Bob and Michelle look pretty young for people who raised a football team's worth of kids.) Jessa wrote on Instagram:

Happy 34th anniversary, Mom & Pops! One might expect y’all to have more wrinkles and gray hair, especially after raising some of those particularly strong-willed kiddos like me. Haha! But you both still look so young! They say that having kids keeps you young, and that surely must be the case because y’all definitely don’t look old enough to have a child who’s in his 30’s! I don’t know of another couple who’s more in love than you are with each other!

Jessa also went on to praise her parents for expressing their love openly, which provided her a sense of security growing up.

Us kids are so blessed to have an example to look up to in your marriage relationship. It’s so endearing to see y’all kissing, holding hands, looking affectionately, speaking loving sentiments, and laughing at each other’s corny jokes (to the point of tears) as though you were still high school sweethearts..But like seasoned veterans, we’ve seen God’s grace in your marriage as you’ve weathered the storms of life together. Crying together in hard times. Praying for wisdom and help from above. Reminding each other and us kids of God’s promise to “work all things together for good for those who love Him.” Your faith in Christ is solid and unwavering, and I’m so grateful for your godly examples..You gave stability to our childhood home, and we never had reason to doubt your love and commitment to one another.

But most of all, Duggar appreciates the fact that Jim Bob and Michelle never argued in front of their kids. Jessa explained:

In all my growing up years, I do not recall witnessing an argument between the two of you. I’m grateful y’all chose to talk through any disagreements privately, and that we didn’t feel the pressure to take sides with either parent..So many marriages are torn down by an excess of sarcasm and put downs that may be laughed at in the moment, but have the ability to create hurts and wounds over time. Thank you for not allowing these things in your relationship or in our home growing up— and choosing instead to speak life, encourage, and build one another up with your words ...

Aww, how sweet. It's nice to see Jessa has many examples of her parents' love for one another.

Cuteness aside, it's interesting to learn what Jessa admires most about Jim Bob and Michelle's parenting. It makes sense that Jessa might take these lessons into her own marriage. There are plenty examples on Counting On of the parents being sweet with one another, and there are lots of photos around Jessa's home featuring the couple kissing or hugging.

Although the Duggars often give questionable advice, Jessa's commitment to these values are admirable. Arguing in front of children can have negative effects on brain development, and it can lead to emotional problems. It's good the Duggars choose to hash out their differences in private.

Happy anniversary Jim Bob and Michelle. It's clear you've given your children a lot to look up to parenting-wise.