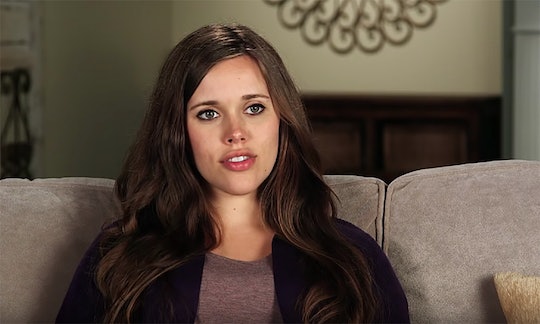 Jessa and Jinger Duggar's daughters were born 10 months apart, which is adorable because there are only about 400 or days between the Counting On siblings' birthdays. Translation: Jessa and Jinger's kids are destined to be BFFs, just like they already are. So I guess it's especially fitting Jessa Duggar's daughter Ivy is a mirror image of her cousin, Felicity.

Ever since Jessa gave birth to Ivy in May, she has been fairly quiet on social media minus a few postings here and there. The reality star decided to gift fans with an especially sweet shot of the 6-month-old on Monday, however, captioning the mother and daughter shot: "My little cuddle bug."

What immediately stands out here is Ivy's similar looks to Jessa, all the way from their chins to the shape of their eyes. But when I stare at the picture a little longer, I see another doppelgänger — Jinger's 1-year-old daughter, Felicity. They even share the same bright blue eyes, which is interesting because Jinger's husband, Jeremy Vuolo, has brown.

Fans see the similarity, too, with one commenter writing, "I thought it was an old photo of you and felicity for a second. Beautiful girls."

Someone else said: "She is adorable and looks like Felicity."

"What a little doll Ivy looks a lot like Jinger's daughter Felicity they look more like sisters then cousins!" another person commented.

Unfortunately, the cousins don't get to see one another very often as Jinger lives in Los Angeles, while Jessa resides in Arkansas. But it's possible the two will share the same zip code one day, with Jessa noting anything is possible. “We’re not set on staying here [in Arkansas] forever, but if we were to be called somewhere else, then we would pack up and move," she said about her future plans with husband Ben Seewald, according to OK! magazine.

In the meantime, Felicity and Ivy will have to twin from across state lines. Good thing for FaceTime, right?