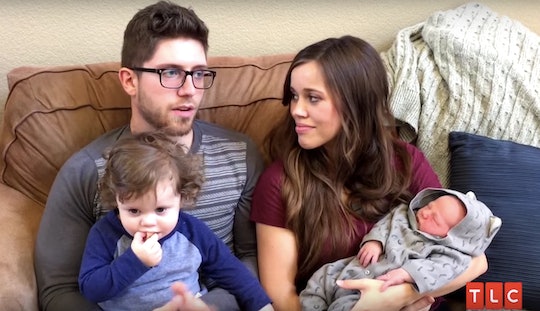 Jessa Duggar Seewald is busy building her own family with husband Ben Seewald, and she's taking fans along for the journey. Jessa Duggar's photos of her kids prove that she's not afraid to share everything that goes on in their lives, from milestones to funny moments to everything in between. Though it's not always easy (and Jessa is not one to shy away from being vulnerable now and again) it's definitely worth it, and watching Jessa grow as a mom over the past three years has been inspiring to say the least.

Though she's seen her fair share of controversy on everything from blanket training to, uh, playing in the leaves (yes, that last one is for real) she hasn't let it stop her from remaining positive and sharing her life with fans. Jessa's first son, Spurgeon, was born in 2015. She since gave birth to another child, Henry, and though she's been ambiguous about whether or not she's trying for her next, it is clear that Jessa has come a long way as a parent and a person. Below are some of fan-favorite photos of Jessa and her kids as she continues to grow her family with husband Ben Seewald.

The very first time fans saw one of Jessa's kids, they were still in the womb! She shared this 3D sonogram of Spurgeon back in 2015.

Jessa's first family photo came from a video still in which the couple announced the name of their first son. In it, they explained why they chose Spurgeon (it comes from Charles Spurgeon was a preacher that had "a big impact" on their lives).

Spurgeon had his first bath while Jessa and her husband were still deciding on his middle name. She opened up about the fact that they were still figuring it out, but that they were excited to share it with fans as soon as they knew.

Jessa gave a major shoutout to her husband Ben for doing his part with the caretaking of their son. She cited late night diaper changes and cuddle sessions as what she was most grateful for.

Carrying on with the gratitude, Jessa wrote a post listing 101 things she was most grateful to her dad for, and included this adorable photo of her parents holding her son.

Jessa shared an all too real moment when Spurgeon dumped out his snacks while trying to eat them. Thankfully, she kept a positive attitude throughout the whole ordeal, though she did note she only turned her back for "one second," which tends to be how it happens.

She joked that her son was not happy with his toys, saying they were "juvenile" and sharing a photo in which he looks displeased, to say the least. (Too real, Jessa. Too real.)

And then there were four! Jessa shared the first photo of Henry shortly after he was born.

Jessa shared one of the first photos of her sons together as brothers.

In these side-by-side photos, you can definitely tell who takes after who!

Jessa wished Ben a happy birthday and shared two photos from a shoot he did with Spurgeon and Henry shortly after Henry was born. She shared how blessed she felt to have him in her life.

In this photo, Ben is reading The Tale of Peter Rabbit to his two kids, in what Jessa called a "relaxing evening with [their] babes."

Jessa shared a photo of her two sons in a shopping cart at the grocery store. Running errands with two kids definitely is a challenge, though I suppose it's nothing when you're used to 19...

Jessa posted side-by-side photos of Spurgeon and Henry when they were both 10 months old, saying how much they have begun to look alike at this age.

Jessa shared another side-by-side shot of her sons wearing the same overalls. Anyone with multiple kids is surely familiar with hand-me-downs (or multiple siblings, for that matter!). Fans can always rely on Jessa to keep it real.

More Like This
Alex Guaranschelli Is A Renowned Chef, But Her Daughter Still Gets Recipe Inspo From TikTok
David Moscow Gave His Mom Two Grandkids & She's Still Holding Recipes “Hostage”
Jessie James Decker's Husband Is Worried A Vasectomy Will Take Away His "Power"
Keke Palmer Casually Drops Her Baby's Sex On Jimmy Fallon
What Parents Are Talking About — Delivered Straight To Your Inbox