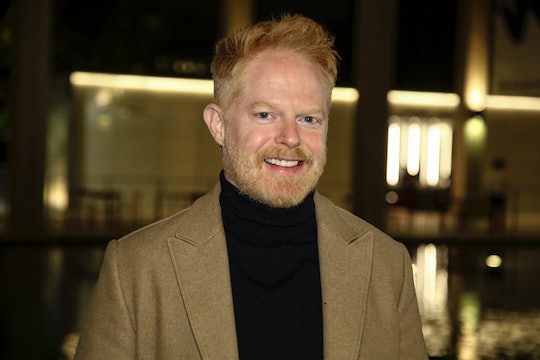 Do you ever see a birth announcement for a happy couple and just desperately want to rain all over their joy parade? No? Then I guess you're not an internet troll. Or this person, who Jesse Tyler Ferguson shut down for criticizing his baby's name. You know you have too much time on your hands when you're going after a newborn baby's name, especially when that baby's name is truly lovely.

The Modern Family actor and his husband, lawyer Justin Mitka, became dads for the first time on July 7. The couple made the announcement via a statement to People through their rep, who told the news outlet, "Jesse and Justin welcomed their little bundle of joy Beckett Mercer Ferguson-Mikita on July 7, 2020. The new parents are overjoyed and excited for this new journey as a family of three."

Ferguson and Mitka haven't revealed too many details about their little one beyond his name, Beckett Mercer. And for some reason that sweet name was criticized by an adult human on the internet. When People shared the happy news on Instagram, a social media user wrote, "What a stupid name seriously lol."

The disrespect of his son did not fly at all with Ferguson. In an exchange captured by Comments by Celebs, the actor responded: "'If we could all just get along as one nation.' - you four Instagram posts ago. Sending love to you sir from us and Beckett."

Ferguson took to Twitter to admit that "sometimes it's just fun to poke the trolls." He added, "The religious fanatics however are another story. They flock to social media like a moth to a flame when LGBTQ people get married or have children. I steer clear of them. It’s not worth giving them the attention."

Fortunately, it seems Ferguson and Mitka have plenty of people who are sending them positive messages along with that one troll, because the Extreme Makeover: Home Edition host took to Twitter to say thank you. And also to give a little insight into the sweet meaning behind their baby's name, "Justin and I appreciate all the kind words about our new little bundle of joy, Beckett Mercer Ferguson-Mikita! We have always loved the name Beckett and the middle name, Mercer is the street in NYC where we got married almost 7 years ago! We are so thrilled to be new dads!"

Now that Jesse Tyler Ferguson is a parent, life is most certainly going to change. And as most parents could tell him, one of those changes will be how intensely, immediately protective a person can get about their baby. And their baby's name.