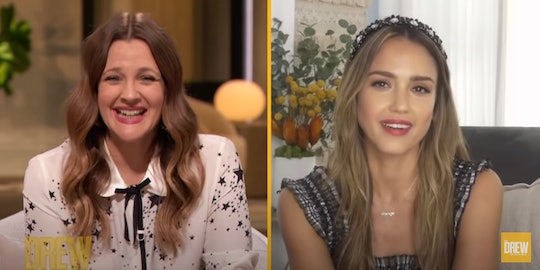 Jessica Alba Is Taking A "Mom Vacation" & Yes, Every Mom *Needs* This

Across the board, 2020 has been a tough year, but perhaps especially for moms. And sometimes an brief escape like how Jessica Alba is taking a "mom vacation" is the only option. I don't want to be presumptuous, but I think it's safe to say that many moms would benefit from something similar. Because who isn't exhausted, touched-out, or just plain overwhelmed right now?

During a virtual appearance on The Drew Barrymore Show, Alba and Drew Barrymore reminisced about their time filming the classic 1999 rom-com Never Been Kissed, when Alba celebrated her 17th birthday on set 22 years ago. Working together on the film was so much fun it apparently "felt like camp," according to Alba. These days, of course, life is just slightly more complicated.

Between their busy lives with kids and life in general during the pandemic, Alba and Barrymore's conversation naturally touched on self-care. Barrymore, who is herself a mom to two little girls, asked Alba, "How, as a mom, with your kids and your job and everything, how is your inner voice?"

Alba, who is mom to 12-year-old daughter Honor, 9-year-old daughter Haves, and 2-year-old son Hayes with husband Cash Warren, got real immediately. "I told everyone in the family that I need a break from them." And so she went ahead and made plans to facilitate a little space for herself.

Alba went on to tell Barrymore that she and a friend "are actually going to go away for a week." "I don't really know what we're getting ourselves into, I just know that I can't be around my family anymore," Alba added. "Because I literally... I've had it. I've had enough."

Both women were laughing, but underneath that laughter there was a deep truth being shared. Mothers have taken the brunt of the struggle during the COVID-19 health crisis in pretty much every way. Whether they're facilitating distance learning for their kids, working from home while also raising their children, never getting a break, and just the general anxiety of raising kids during a pandemic, it's probably safe to say that everyone has had enough. In July, in fact, The New York Times published a survey that found mothers were disproportionately affected by COVID-19, and things have not gotten easier since then.

No wonder Alba needs a break. No wonder all moms need a break.