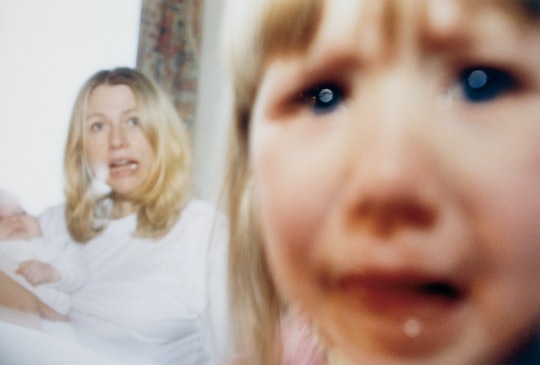 Mothers Were At A Breaking Point Before COVID — What Should We Call It Now?

It was week three of the COVID-19 lockdown, following a protracted effort to get her toddler and baby to sleep, when Lois McMillan had her first meltdown — a hard jag of crying. “Around week five I realized how intense my jealousy was of my friends who don’t have kids,” McMillan says. Under normal circumstances, her 3-year-old would attend nursery four days per week and McMillan would have some time nearly every day to work on her homeware and fashion brand, sewing cushions or skirts while her baby napped in a carrier or played happily in a Jumperoo. COVID has pushed her to near a breaking point.

McMillan feels like she’s “losing it” at least once a week. “I’m tired. I’m unable to work, which is my passion and escape from parenthood, and when one of the kids doesn’t eat or doesn’t sleep (they take it in turns) I’m teetering on the edge all the time,” she says.

Although lockdown restrictions worldwide have begun to ease (to varying degrees, depending on the area), many mothers are still operating under less-than-ideal conditions. Many, like McMillan, don’t yet feel safe sending their children back to daycare. Those who might normally rely on grandparents for babysitting are still afraid of putting older relatives at risk. Others still have lost their jobs, or are navigating working-from-home with watching the children 24/7. We’re in wholly uncharted times — and our mental health has taken a major hit.

Since becoming a mother, there have certainly been moments when I wondered if I was on the verge of a nervous breakdown. It was a term I had only ever heard used by and applied to women, especially moms. I have thought about the ladies of Mad Men. Betty Draper, who leaves her house in a gorgeous nightie and starts shooting at birds while smoking a ciggie. Peggy Olsen, who goes through an entire pregnancy in denial, has the baby, and is then sent to a sanitarium. If I had been a woman, or a mother, in the ‘50s or ‘60s, how would I have fared? Like Susanna Kaysen, author of Girl, Interrupted, would I have been sent away for my anger or impulsivity? For drinking alcohol or feeling really damn blue?

There is a lot of language applied to women who struggle in the postpartum days, months, or years. “Nervous breakdown,” has come to my own mind, even though it feels kind of old-fashioned. More people are making note of “mom rage” now, too. “Aren’t all mothers crazy?” an acquaintance replied after I confessed to feeling out of control.

“Parents joke about having a ‘nervous breakdown’ because there’s still a lot of stigma around mental health, especially for moms, who can be judged over admitting they’re not perfect,” says Lindsay Powers, author of You Can’t F*ck Up Your Kids: A Judgment-Free Guide to Stress-Free Parenting.

Unfortunately, the term’s history and usage are a reminder of how far we still have left to go when it comes to supporting mothers, and normalizing the grittier, messier facets of having children.

In truth, “nervous breakdown” isn’t actually a medical condition. “It feels like an antiquated term,” says Dr. Kathryn Smerling, a family psychotherapist based on New York’s Upper West Side. “As mental health professionals, we don’t use that term. But my interpretation is that it refers to an overwhelming sense of hopelessness; being overwhelmed by events and people around you. I think it’s anxiety, depression, and hopelessness.”

We have clinically moved beyond the terms 'nervous breakdown' or 'hysteria,' even if we have not entirely rejected them socially.

Where women are concerned, it seems to hearken back to the times of “hysteria.” First described medically in 1880 (though casually used for generations before) and a formally-studied psychological disorder found in the American Psychiatric Association’s Diagnostic and Statistical Manual of Mental Disorders until a century later, hysteria was believed to be a disease affecting only those of us with a uterus and a pesky “wandering womb.” According to Glamour, “It served as a catchall for a variety of issues, including (but definitely not limited to) fainting, anxiety, sleeplessness, irritability, nervousness, and ‘a tendency to cause trouble for others.’” Until the early 1900s, both “nervous breakdown” and “hysteria” were formal diagnoses for women exhibiting any kind of neurosis, but especially demonstrations of rage and despair.

In 2020, we have clinically moved beyond the terms “nervous breakdown” or “hysteria,” even if we have not entirely rejected them socially. Overall, we have a deeper understanding of the wide spectrum that is mental health (including postpartum mental health). However, we have not moved beyond the experience of rage. The undeniable truth is that a lot of mothers are angry; we do feel like we are “losing it,” and many of us still don’t seem to have the tools, the support, or the resources to shift that narrative.

“I think ‘mom rage’ is over-simplified,” Molly Caro May, author of Body Full Of Stars: Female Rage And My Passage Into Motherhood, tells Romper. “It normalizes something without fully investigating how we might shift a system so moms don't have to feel so much rage. It has an acceptance quality. As if this is just the way it is. My response is, ‘Does it have to be?’”

“If moms had space and nutritious food and adequate support and partners were showing up emotionally and logistically and moms didn't have to negotiate for every inch of time, would there be mom rage?” she asks. “I think moms would get irritated in moments, but I don't think we would be living in this pervasive and consistent frustration. The mom rage is a reaction, a response to a broken system. It's mom crying out to say, ‘This is not OK! This is not manageable. We are overtaxed.’”

With reduced child care, ongoing professional and academic pressure, and heightened mommy and homemaker demands, we’ve come face-to-face during the pandemic with the expectation to balance all the things, and perhaps, with the realization that “doing it all” was never possible in the first place.

Eleanor is a doctoral candidate working on her degree from home, while watching her children full time. Her partner is a 9-5 essential worker, and hasn’t been furloughed or able to take any kind of leave, shifting the burden of domestic work onto her plate. Her son is 18 months old — the age that presented the most difficult stage of parenting with her firstborn. The lockdown “put me back at home with my 18-month-old hooligan, without access to the museums, libraries, or swimming lessons that helped keep me sane last time,” she says in an email conversation with Romper.

When Victoria, a 33-year-old mother in London, experiences rage, “it comes out as a raising voice, short tense responses, swearing, and wanting to run the f*ck away. And sobbing. Lots of sobbing.”

“It’s no wonder we are both irritable and adrenally-fatigued,” May says. “It's the inevitable outcome of sleep deprivation, hormonal imbalance, not enough time alone, very little emotional or physical support, and balancing mother life with anything else the soul needs (work, play, art).”

It’s critical to remember it’s OK to be a 'good enough mother,' a term first coined by British pediatrician Donald Winnicott in 1953.

Mental health professionals are actually anticipating a surge in mental health issues among mothers as a result of quarantine. For Black mothers, the physical and mental health risks are even higher. There is less support out there than ever. Many are being tasked with running their child/children’s social and educational lives, often while working other full-time jobs (or trying to). If things were hard before, COVID has tipped moms out of the frying pan and into the fire.

Dr. Smerling believes it’s critical to let ourselves feel our anger; to be our most “authentic selves,” including the unpleasant parts. Still, there have to be limits. “It’s really important that you don’t inadvertently take your rage out on your child,” she says. “All babies do is feel. They don’t have language or much movement in the beginning; they just have a sense of feel and touch. If you’re angry, it’s going to show. Even as a little baby, they will react. Eye contact is really important as well. Babies can tell if the eye contact they’re receiving is with love or if there’s nothing reflected in your eyes.”

A similar principle applies when thinking of toddlers and older children as well. Feeling rage might be valid, but directing one’s anger at a child can have terrible consequences. Ragini Nag Rao, mother of a 1-year-old, grew up in a violent and abusive household, and practices mindfulness and self-awareness to keep her anger under control, or at least away from her baby. “There have been multiple occasions when I’ve been exhausted and in pain and stressing about work and she’s been absolutely impossible,” she says. “I’ve felt utterly defeated, I’ve cried, I’ve even screamed at my husband, but I’ve never once raised my voice at my little girl. It’s like there’s a barrier in my head that prevents me from doing that, and I’m so grateful for it.” In such moments, she prefers to leave the room and separate herself from the situation.

Becca K, 31, a mother based in the Chicago area, grew up in a similarly volatile environment, in which her own mother’s demonstrations of rage sometimes got physical. “Society wants and expects mothers to always look good during pregnancy and after birth, to have well-behaved and well-groomed children, who are attractive, smart, kind, etc. It's too much,” she says. “You're judged for working, or like me, for staying home. And when all this gets too much, and a mother starts to show cracks, society is like, ‘No, she's crazy. Children are a blessing. She should be grateful.’”

In moments when we slip up — when we feel imperfect — Smerling says that it’s critical to remember it’s OK to be a “good enough mother,” a term first coined by British pediatrician Donald Winnicott in 1953. “You’re doing a good enough job. There are none of us who are perfect. That’s what we should be striving for, being the good enough mother — not the perfect mother,” she says.

If our feelings of anger become all-consuming, however — if we reach the point that might have once been described as a “nervous breakdown” — then we might also consider seeking professional help. Smerling says it’s important to “speak to someone as soon as you feel out of control.”

If there’s one thing I believe lockdown has made clear to many, many mothers, it’s that we have never been set up to “have it all” or “do it all.” Even pre-COVID, there was no shortage of us who felt worn down, fed-up, exhausted, or on the brink. Lockdown exacerbated it all, for sure, and perhaps there’s never been a better time to open up. Maybe we are all on the edge of a “nervous breakdown,” or maybe we’re just women — mothers — in a world that still isn't kind enough to either.

Lindsay Powers, author of You Can’t F*ck Up Your Kids: A Judgment-Free Guide to Stress-Free Parenting

Molly Caro May, author of Body Full Of Stars: Female Rage And My Passage Into Motherhood