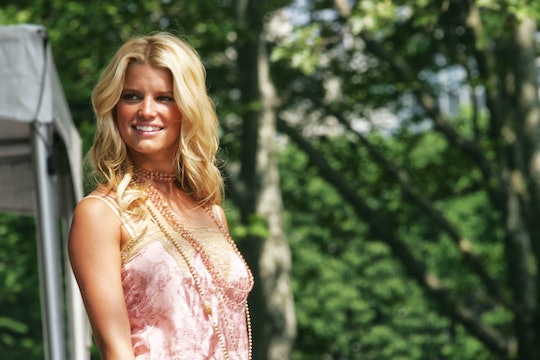 In an exert from her forthcoming memoir that was shared with People magazine, singer Jessica Simpson has revealed that childhood sexual abuse led her to self-medicate with alcohol and pills as an adult. Five years after being asked to write a motivational book on how to live your best life, Simpson is ready for her book to hit shelves. But Open Book isn't the how-to Simpson was initially asked to write. Rather, it's an emotional tell-all that digs deep into past traumas and how she's worked to overcome their longstanding impact.

"I was killing myself with all the drinking and pills," Simpson wrote of how she self-medicated for the emotional pain of allegedly being sexually abused as a child. As People reported, Simpson was abused at the age of 6 while sharing a bed with the daughter of a family friend. "It would start with tickling my back and then go into things that were extremely uncomfortable," Simpson wrote. "I wanted to tell my parents. I was the victim but somehow I felt in the wrong."

Simpson said it took her six years to finally open up to her parents. In the excerpt shared with People, she said her announcement caused her mother to slap her dad's arm and yell, "I told you something was happening." Her dad, however, had a different reaction. "Dad kept his eye on the road and said nothing," People reported Simpson wrote. "We never stayed at my parents’ friends house again but we also didn’t talk about what I had said."

The singer and fashion designer said she moved to numb away the trauma of that abuse as well as the stress, anxiety, and pressures that came along with her growing career in music and film. After breaking into the music scene at the age of 19, Simpson quickly became known as "America's Sweetheart" thanks to chart-topping hits, roles in That 70s Show, The Dukes of Hazzard, Employee of the Month, and Blonde Ambition, as well as her own reality TV show. But behind the scenes, Simpson said she struggled with alcohol and pills until she hit rock bottom in November of 2017.

It was then that the mother-of-three stopped drinking and started therapy. "Giving up the alcohol was easy," People reported Simpson wrote of her sobriety. "I was mad at that bottle. At how it allowed me to stay complacent and numb." Harper Collins, the publisher behind Open Book, explained that Simpson used journals she'd kept since age 15 to guide her in writing the book.

On Wednesday, Simpson thanked People magazine over Twitter for helping her share her story, adding that "there is so much beauty on the other side of fear" and that she hoped her truth could help others.

In Open Book, Simpson claimed that admitting she needed help led her to find her life calling once again. "I found direction and that was to walk straight ahead with no fear," she wrote. "Honesty is hard but it's the most rewarding thing we have."

Open Book is expected to hit shelves on Feb. 4.