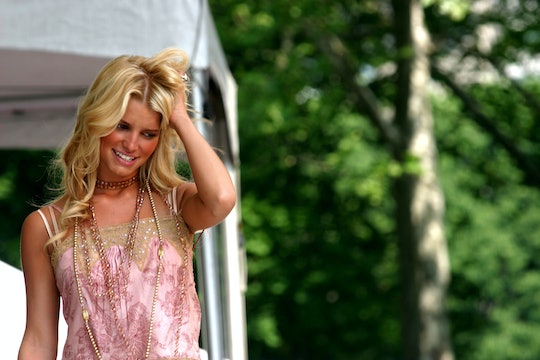 In a recent appearance on Jimmy Kimmel Live, Jessica Simpson revealed she once kissed Justin Timberlake. However, the Open Book author claimed her smooch with one of pop music's sexiest singers wasn't as steamy as you might think.

"I knew Justin Timberlake very well," Simpson recently told late-night host Jimmy Kimmel while promoting her upcoming memoir Open Book. "After [my] divorce and he was out of a relationship, he was over at my house and we shared a nostalgic kiss. I thought, 'oh, this is interesting.'"

But according to Simpson, things between the two singers didn't progress any further. "He took his phone out and started typing," Simpson revealed. "And I was like, 'Okay, I hope that's not another girl. Did I, like, stick my tongue out too much or, you know?'"

While Timberlake wasn't texting another girl, it seems he was kissing and telling, or rather, kissing and texting. "Apparently him and Ryan Gosling had a bet on who would kiss me first when they were 12 years old and so he'd texted Ryan and said he'd won the bet."

Let's back up. Simpson's divorce to 98 Degrees singer Nick Lachey was finalized in June 2006, according to People, which is roughly around the time when Timberlake is believed to have been briefly single after splitting with Cameron Diaz, per Us Weekly. In mid to late 2006, Timberlake would have been 25, making his bet with Gosling approximately 13 years old at that point.

Unsurprisingly, any interest Simpson may have had in continuing to kiss Timberlake vanished when she learned of his bet. "I was like, 'Oh, okay. Um, so we don’t kiss again. That's done.'"

Although it took 13 years for Timberlake to win his bet with Gosling, Simpson confessed to Kimmel that, if he'd tried, Gosling might have been able to kiss her when they were younger as he was the one she'd had a crush on. "Ryan was the one," Simpson said. "When I was 12, I was like, 'This guy is so cool and he's from Canada. I don’t know where that is on the map, but I really think that that’s amazing.' And there was something so cute about him. But Justin won the bet."

As for what the pair bet, Simpson still has no idea. "I don't even know what they bet," she told Kimmel. "Lord knows."

Sadly, the details of Timberlake and Gosling's bet are likely to continue to remain a mystery.