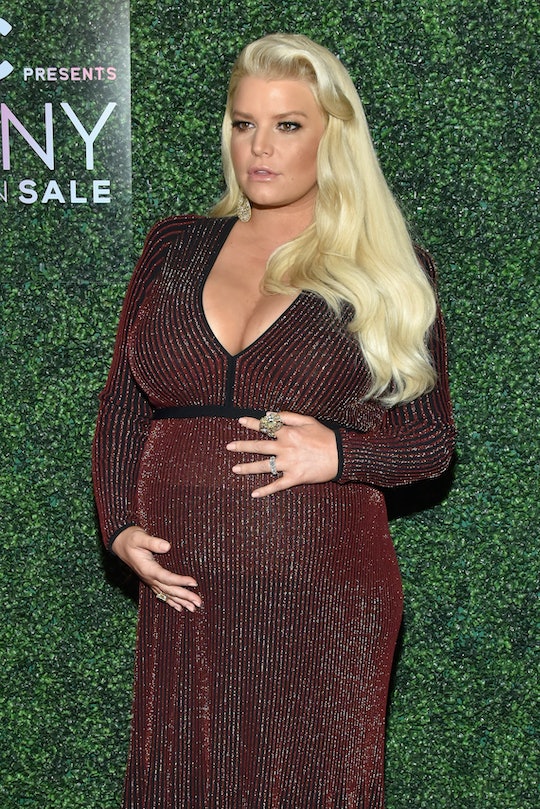 Jessica Simpson posted the most relatable selfie ever for pregnant moms on Super Bowl Sunday, highlighting how anxiety-inducing pregnancy can be. The singer and footwear mogul has been struggling with sciatica pain and Bronchitis on top of her pregnancy stress, so Jessica Simpson tried to calm her pregnancy "anxiety" by taking a walk. It may not sound like a big deal to some, but she literally had to wait until the swelling in her feet had gone down enough so that she could actually fit into her shoes. Imagine not even being able to leave your house to decompress. The mom struggle is real.

Simpson has been candid about her struggles with her pregnancy since she and husband Eric Johnson announced they were expecting back in September 2018, and she's made it clear the third time around has been no walk in the park. (Romper feels you, Jess.) She's been particularly vocal about her swollen feet, which is ironic because of her successful shoe line, posting pictures on her Instagram of the clever ways she finds to ice them to bring down the swelling. (read: portable ice packs.) It looked like she finally got a break from the foot pain though, based on her Super Bowl Sunday post.

Although a walk probably won't totally cure the star's anxiety, it can definitely help. Walking is a good solution for anyone struggling with general anxiety: it's recommended by the Anxiety and Depression Association of America as one of the best natural ways to decrease anxiety. I don't think anyone is totally anxiety-free during a pregnancy (share your secret with the world if you are, please), and it's not like you can exactly just stop thinking about the human being you're growing in an attempt to calm down, so a walk isn't a bad move.

Plus sciatica, lower back pain caused by pressure on the sciatic nerve that then radiates into your buttocks as Mayo Clinic explains, would definitely increase Jess's stress levels — and how much pain she's in. It's also unfortunately super common once you hit the third trimester of a pregnancy because the baby and your uterus put pressure on the nerve, as if you didn't have enough change happening in your body already. Even worse, some women can't take normal pain medications when they're pregnant, making the whole thing even worse. There are safe ways to treat the condition even when you are pregnant, but it's definitely more complicated than it would be if you weren't growing a human. Hopefully Simpson has had access to some of the safe treatment methods.

But props to the pop star for sharing her struggles. The myth of pregnancy being magical and beautiful and not at all painful is still annoyingly prevalent despite the many women whose everyday lives prove differently, so anytime a public figure speaks out with a more realistic image of motherhood is a good day. Simpson shares relatable mom posts on her social media pretty often, showcasing her pregnancy struggles and moments with her two older children, Maxwell and Ace. Keep doing you, Jessica.