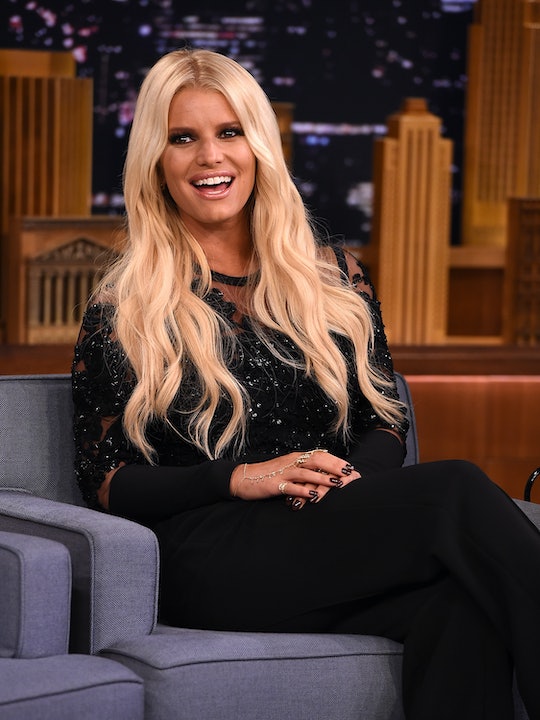 It shouldn't be much longer now until singer and fashion mogul Jessica Simpson welcomes her third child into the world. But while many celeb moms seem to enjoy making pregnancy look like the easiest, most fun experience in the world, Simpson is totally down to tell it like it is. In fact, Jessica Simpson's quotes about pregnancy have always been so honest, they can sometimes border on TMI — and it's one reason why the star is *so* relatable as a mom.

Because, let's face it, as much as we may hope to have the gorgeous, effortless pregnancies of Instagram models, most of us are stuck waddling, puking, and lamenting the fact that our clothes no longer fit. So if you could use a little dose of pregnancy reality, Simpson is always going to be your girl.

Simpson and hubby Eric Johnson made the surprising announcement in September that they were expecting a baby sister for 6-year-old Maxwell and 5-year-old Ace, having previously claimed they felt totally done having babies. But these days, with the prospect of their little girl's impending arrival, it sounds like everyone in the family couldn't be more excited, and that they're all totally ready to meet their newest member.

Getting Pregnant Again Definitely Took Her By Surprise

Although most celebs seem to choose to keep their pregnancy news under wraps, at least for a while, Simpson's Instagram pregnancy reveal felt particularly newsworthy. That's because not that long before, she'd publicly proclaimed she was *so done* have kids.

In May 2017, Simpson sat down with Ellen DeGeneres and revealed she'd had an IUD inserted, before adding, "I have two beautiful children, and I'm not having a third." In October though, she explained to Entertainment Tonight that, obviously things hadn't exactly worked out according to her original plan, and said:

I thought about [having another baby], but I didn’t really know that it could actually happen. We definitely always love to practice. We actually weren't practicing very much that month so I don't understand. We try [to figure it out]. This might be a miracle baby.

The Third Time Has Actually Been The Hardest

But it wasn't just that the pregnancy itself came as a surprise: Simpson also told Entertainment Tonight that she is finding pregnancy #3 to be the hardest one so far. Simpson told the outlet that while she was still feeling pretty good, "the third time is definitely harder."

Pregnancy Has Brought Some Seriously Uncomfortable Side Effects

Although there do seem to be women out there who are capable of making it all the way to their due date without any misery, Simpson isn't hiding the fact that she is not one of them. Specifically, Simpson has shared that she's actually had an awful time with swollen feet and ankles. In October, for example, she posted a few different photos on Twitter of having to ice and elevate her feet to cope with pregnancy-related edema. "When you’re pregnant and have to ice your swollen feet before the flight...," she tweeted.

And in December, she turned to Instagram for advice, and shared a pic of her seriously swollen foot.

Thankfully, the swelling seems to simply just be a frustrating side effect for the mom-to-be, but at least she's able to laugh about it: in her own "10 Year Challenge," Simpson posted a before-and-after of her own legs.

And Sometimes Pregnancy Is Just Exhausting

Anyone who's had a baby on board before will tell you that pregnancy can be majorly tiring. And though sometimes it gets easier after the first trimester, being pregnant in general can take a lot out of you. It's no surprise then, that many of Simpson's updates this time around have simply been about those little moments of pregnancy that seem to suck up all a woman's energy.

In September, she shared a photo of her catching some zzzs, and captioned the pic, "This momma wants sleeeeeeeep," while in October, she posted an airplane selfie, and admitted that she was surprised to look so put together given that she had "to go to the bathroom 40 times on [her] flight."

And in her most recent Instagram post? Simpson admitted to having trouble sleeping in her third trimester, and wrote, "Walking in the rain to fight insomnia."

She's All About "[Owning] The Waddle"

Simpson may not be loving the pregnancy swelling, and she's definitely taken a ton of unfair and uncalled for criticism in the past for the way her body looks while pregnant. But as far as Simpson is concerned? The best thing any pregnant woman can actually do once she finds out she's expecting is lean right on it to the physical changes about to happen, and "go with the waddle." Simpson told Entertainment Tonight,

Immediately when I found out I was pregnant, it was like 'stick the stomach out, pop the hips out, and just waddle'. Just own the waddle. That is my strut.

...Along With Her More Embarrassing Bodily Functions

Simpson is already known to be a celeb who doesn't always seem to have much of a filter, but in her earlier pregnancies she shared some details that most women would probably have otherwise kept under wraps.

On Twitter in 2011, for example, Simpson retweeted a tweet from OMGFacts that said, "The average person expels flatulence 15 times each day." Simpson's take? She wrote, "The average pregnant woman farts 15 times that!"

She was also pretty open about carrying extra amniotic fluid during her first pregnancy with daughter Maxwell, according to Us Weekly. In an interview back in 2012, she told Jimmy Kimmel:

I feel like I have a bowling ball sitting on my hoo-hah. Apparently I have a lot of amniotic fluid, so whenever my water breaks, it will be like a fire hydrant!

Of course, all pregnancies are different, and it's likely that there are women out there who can't relate to all of what Simpson has to say about what it's like to carry a child. But given that she could easily make it look super glamorous and effortless, there's something super refreshing about Simpson's ability to tell it like it is. Because while pregnancy can certainly be amazing, it isn't *always* a great time.