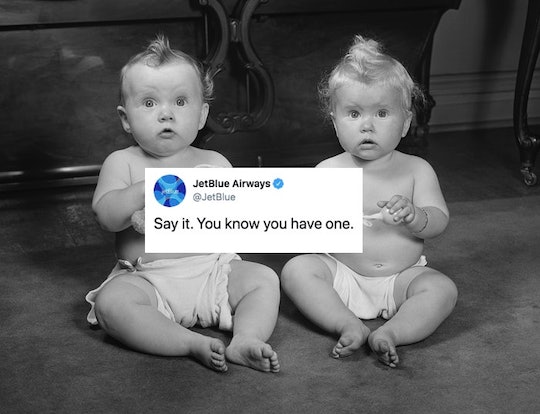 Do you have a favorite child? If you're like most parents, you probably resist the urge to even consider this as a serious question. We aren't supposed to pick favorites. But if you plan on taking a flight any time soon, you might need to give this some thought as a viral tweet showing a security question from JetBlue apparently asking passengers to name their favorite child is, umm, quite deep and caused a hilarious stir on social media.

On Sunday, a JetBlue passenger shared a screenshot of a security question the airline had provided on Twitter. It looked like the airline had chosen to break the cardinal rule of parenting by asking parents to name their favorite child. "JetBlue savage for this," Twitter user @_lanaloo captioned the screenshot.

Now if you're worried that the airline was unhappy about being outed for asking such a potentially awkward question, think again. JetBlue boldly doubled down on the question by retweeting the screenshot with the caption, "Say it. You know you have one."

While it sort of seemed like JetBlue is totally fine with asking parents to rate their kids, that's actually not the whole story. A spokesperson for JetBlue explained to Romper that there was a slight misunderstanding. "We love having fun with our customers on Twitter," the spokesperson said, adding that "the actual question is 'What is the name of your favorite childhood friend?'"

"In this tweet, the customer would have seen the complete question before selecting it," the spokesperson explained.

I have to say, I'm sort of relieved. As a mother of four this question was making me sweat. That being said, JetBlue's genius decision to simply roll with the mix-up and open up a social media dialogue has made for some entertaining tweets. Like one person who would choose Baby Yoda from the new Disney+ show The Mandalorian as their favorite rather than their own human child.

JetBlue's response to this tweet? "Hard to argue with, this choice is."

Another parent noted that their response would change pretty much every day, depending on which of their children was getting on their nerves at the time. "I would get it wrong all the time, my favorite would [be] the one that hasn’t pissed me off in the last 24 hrs... that changes constantly," they said.

Still another social media user took the question in a different direction. When answering who their favorite child is, their response was, "Julia. Julia Child." I mean, I never even considered this but her recipes are pretty delicious.

JetBlue really knew how to spin this into some gentle social media comedy. And for this, I thank them. Especially since they're not really making parents pick a favorite child. That is the stuff of nightmares.