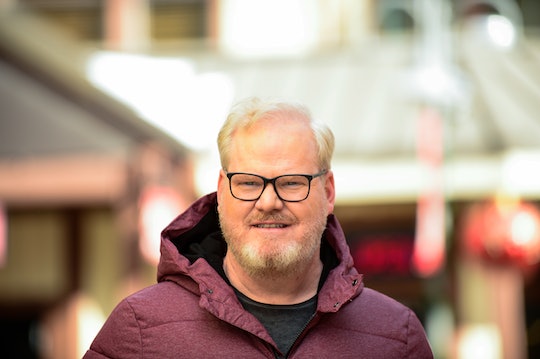 Well the results are in and it seems we have a winner: Chicago deep dish pizza. Or at least, those were the results when comedian Jim Gaffigan held a "family election" on Tuesday night. I won't lie to you, I wish I had been obsessively watching these results come in rather than the actual election. My blood pressure would have been considerably lower.

Gaffigan and his wife Jeannie decided to hold a little election of their own on Nov. 3 while the rest of the country (and most of the world) was fixated on the 2020 presidential race between President Donald Trump and former Vice President Joe Biden. Along with their five kids, 15-year-old Marre, 14-year-old Jack, 11-year-old Katie Louise, 9-year-old Michael, and 8-year-old Patrick, they decided to get serious about pizza. Namely, holding an actual election to definitely decide on the best kind of pizza.

According to the comedian's Instagram post about it, the whole family took it pretty seriously, too. There was a ballot box, covered in American flags where people could privately cast their vote. There was a copy of the Declaration of Independence and a note from Uncle Sam saying "I want kids to vote."

The Gaffigan family's pizza election results are already causing some pretty heated debates on his Instagram feed, with one social media user writing, "Stuffed crust demands a recount." Another person was concerned about my own personal favorite, the thin crust pizza which is obviously superior in every way, "It was rigged! Thin crust is the only winner."

At least you know Gaffigan believes passionately in the election process. And delicious food in general. Earlier on Tuesday, he tweeted about his coping skills on election night and they mostly included eating, "About to start eating my third dinner entree. Not dealing with any stress at all."

The Pale Tourist star has mostly kept out of non-pizza related politics throughout the election, save one night when he had a glorious Twitter rant about President Trump where he effectively asked Trump supporters to "wake up" regardless of the damage he might be doing to his career.

Sometimes a person has to speak up. Sometimes they have to host their own pizza election and stress eat to deal with anxiety. Life is all about balance, folks.